We woke up early, around 5am, and watched CNN for a bit. During our stay in Italy, this was the easiest way of catching up with the news, at least all the big world news. Getting it from the Italian news services was a bit dodgy with my Italian vocabulary, which was (and still is) tiny. I did work out that "morte" meant someone had died, something which often features in world headlines, but which is next to useless if you don’t understand who has died, how many of them there were, where it was and why. 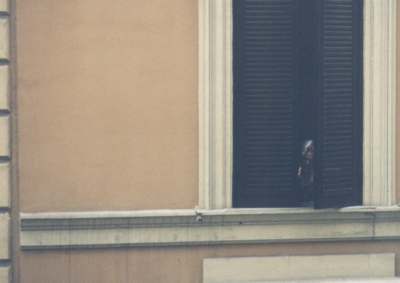 After breakfast we set out. We wrestled with the Metro ticket machines, then headed for the Colloseo. (That is, the Colosseum – and I demand to know why we have an English translation of it, when the English word doesn’t actually mean
anything. I mean, why did we bother? The same with Roma/Rome. What does Rome mean? Nothing. So why not just call it Roma?)

If you’re ever taking someone to Roma, just take them to the Colloseo without saying where you’re going, and watch their face as they walk out of the station. It’s just THERE, in front of you, opposite the entrance, in all its colossal glory.

If I had only four words to describe it, those four words would be: "It’s ancient and huge". We walked around it to the entrance, gazing up in awe at it, chuckling at the blokes dressed as centurions getting their pictures with tourists, and of course watching out for those dreaded gipsy children that all the guidebooks warn you about, the ones who apparently distract you with newspapers in your face or by throwing excrement, then pick your pockets before you realise what’s happening. Lovely.

Actually, I saw no hint of any of this while we were in Rome, though I did see gipsies begging from time to time. And I did spot a bona fide (if such a word could be used to describe him) pickpocket on the Metro a few days later.

We coughed up our hard-earned lire and went into the Colloseo, trying to avoid the large groups of large elderly tourists clambering around the place. At one point Isaac found a quiet spot and announced that nature had called, then promptly pulled down his pants and marked his territory on the ancient monument. Oh to be a little kid again and to be able to do that kind of thing without raising eyebrows or being arrested.

After eating some exorbitant but delicious ice creams, we walked up Via Dei Fori Imperiali, then Via Del Corso, stopping along the way to look at whatever was interesting. It started raining a little bit, and suddenly the streets were filled with umbrella salesmen. We didn’t mind the rain too much, and had no umbrella, so every couple of minutes we’d be offered one. The price varied according to how hard it was raining. When it was just spitting, they’d haggle themselves down to 5,000 lire for an umbrella (about A$4). When it was raining hard, the price wouldn’t go below 10,000.

It would be an hour or so later, when it was really pissing down, that we finally gave in and bought one (sure enough, 10,000 lire). We reached the Trevi Fountain and L did the apparently traditional coin tossing thing, before we began a search for the fabled Pasta Museum.

We eventually found it in a little alleyway, and looked around inside, attempting to listen to the rather amusing attempt at an English translation of the commentary on the museum’s special CD player. Everyone else seemed to have problems with theirs running out of battery power, and ours was no exception. At the end they gave us two bulky books about the museum, which alas seemed to be more about the museum itself that about the history of pasta. Whoever compiled it seemed to be obsessed with a picture of a busty Sophia Loren eating spaghetti – it appeared many times in the two books.

Then we headed back to the environs of the hotel, for relaxation and dinner.