Yesterday, just for something different, and as part of our pledge to see more of our own country before we go off gallanting around the world again (like last month), we drove all the way around Port Philip Bay. Yes, I know technically speaking it’s called Port Philip, but let’s not get too caught up on details.

We set off bright and early, something we achieved by vowing not to open the Saturday Age before leaving. Once the paper is open, there’s so much of it that reading all the sections and supplements can swallow the bulk of the day.

After a stop at Coles to pick up supplies, we headed south down the Nepean Highway, a road I have become a little wearisome of, because between Mordialloc and Frankston there are about half a dozen suburban centres that look identical. No, really. Take away the placename signs, and try and tell the difference between Aspendale, Edithvale, Carrum and Chelsea. Each has the railway station and houses on one side, shops and expensive houses and beach on the other, and the highway with way too much traffic to make the drive pleasurable through the middle.

So at Edithvale (or was it Aspendale?) we took the turn off to try and find the freeway. We found it and headed south at greater speed, glancing at the farms and other assorted non-suburban stuff that they obviously were less fussy about bulldozing when they built the freeway.

After zipping along through the outer bits of Frankston, and various other places whose names will remain forgotten, we made a stop at Mornington, where I dropped a two dollar coin and watched helplessly as it rolled under the car.

Mornington, being just out of the reach of Melbourne’s suburbs, has the feel of a country town, and we had a look around the shops, availing ourselves of a snack or two in the process. We also admired the view of the sea from the main street, and gazed in awe at the astonishing cleanliness of Mornington’s public toilets, which are truly a joy to behold.

We got back in the car. I drove the car a metre forward, and then I got out to retrieve my two dollar coin, and we continued. Two hundred metres later we stopped again to look at the street directory and try and figure out where we were going. Then we headed for The Esplanade, which follows the coast down towards Dromana and the peninsula.

While everyone else enjoyed the spectacular views of the sea, I kept my eyes glued to the road. It’s a tricky bit of driving, that stretch of road, something that a thick black line in a street directory doesn’t really tell you. Not like the line marking the Arthur’s Seat Road, which gives some indication of how tight the turns are. I can tell you just how tight they are because this is where we went, rarely getting out of second gear as we climbed the mountain.

Last time we came to Arthur’s Seat, L and I rode the chairlift up. Both methods probably take about the same amount of time, and I think the chairlift is probably infinitely more relaxing. We reached the top and gave the car a rest while we looked out at the view, before taking a few photos and pressing on through the forest to the Ashcombe Maze, which is situated… err.. somewhere in the middle of nowhere.

The Ashcombe Maze is a place where, for $7, you can get lost in several mazes of very high hedges. And while this may or may not sound like a lot of fun, it actually is a lot of fun, and it helped us build up an appetite for lunch. But rather than eat at the tearooms handily provided at the entrance to the maze, we decided to head back to the coast for some fish’n’chips.

So we drove back through the forest and down Arthur’s Seat back to the coast, then spent ages driving down the peninsula looking out for fish’n’chips shops, preferably ones that weren’t a case of "oh there goes one dammit, nowhere to park anywhere along here, nope nowhere to turn off and walk back either, drat we’ll have to do a U-ey to get back to it Oh stuff it, let’s keep going until the next one."

We eventually found one called Jude’s Fish’n’Chips, ordered a Family Pack, and proceeded to absolutely stuff ourselves on flake, flake and more flake, chips, potato cakes, calamari rings, you name it, we ate it. Thoroughly bloated, we heaved our substantially bulkier frames back into the car and continued on, headed for Sorrento, where the ferry leaves to go to Queenscliff on the other side of the bay. 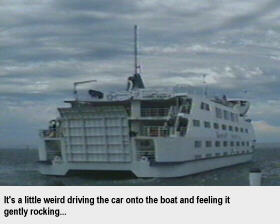 Successfully missing the turn off, we ended up in Portsea, then headed back to the ferry terminal where we coughed up $40 to get us and the car over the water, and waited for the ferry to arrive. It was the first time I’ve driven onto a ferry, and it’s a little weird driving on and feeling the car gently rocking with the boat. Once we were sailing, we headed up into the lounge where we could relax, watch the position indicator on the screen a la Qantas, and scoff down some dessert, a truly memorable piece of chocolate cake from the kiosk.

It was almost 3pm by the time we reached Queenscliff, which is actually only about the halfway point around the bay from home, so we pressed on without having a proper look around. But rather than just take the Bellarine Highway to Geelong, we did take a quick detour towards Portarlington, changing this plan to go via Drysdale instead when we realised just how far it was to Portarlington.

We continued on to Geelong, and ended up having a relax in the very same park we went to two weeks ago, down by the water, and with some very intriguing play equipment. 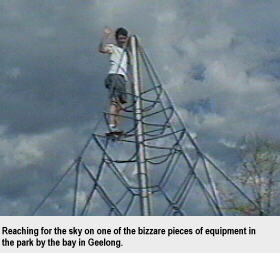 It was pretty plain sailing after that, back onto the freeway to Melbourne, with only a slight hiccup when we took the wrong exit heading for my sister’s place in Richmond. This was followed by a few minutes driving slightly bewilderedly around South Melbourne before I found the way again. Eventually we got there and had dinner, then headed home, with a lazy few hundred more kilometres on the clock than had been there that morning, about half a tank of petrol gone, and mental notes of several places to go back to and explore more thoroughly.