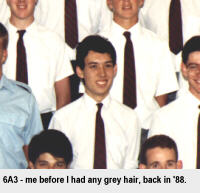 For those who share my age of 28, this year is the tenth anniversary of leaving high school, which means it’s reunion time. Mine was last Wednesday night; a chance to get a look around the school to see how it’s changed, and to catch up with a few people that I haven’t seen since that fateful last day of Year 12.

Some people are fatter, some greyer, some with less hair. Some looked identical to how they looked in 1988. Most certainly seemed to be wiser. A few still at university (some with no prospects of escaping – and loving it). Lots of professional computer geeks like me. A cop, a photographer, a physiotherapist… a bit of everything, really.

Of the 300-ish of us who left in 1988, about 100 turned up, which is not a bad number. And as I gazed around the room during dinner, I came to the conclusion that people at peer group reunions fall into four categories*:

After dinner, a few drinks, a few anecdotes (one day I’ll have to discover the full truth behind The Box Hill Incident), and yes, some fairly rowdy singing of the school song and various other ditties, I was left wondering where my co-conspirators in our last day prank were – and whether or not anybody else remembered it. It involved water pistols, bean bag beans, and an unprovoked and fairly messy attack on some otherwise innocent teachers during a junior assembly. Perhaps it’s a subject to be raised at the next reunion.

*It took almost five years for anybody to notice and point out to me that there are actually five categories listed. D’oh.