From Singapore the plane continued south, symbolically inching its way across the map on the TV screens towards home, as well as actually inching its way across the planet towards home. When the map wasn’t on we got to see various movies and TV shows, but what caught my eye was news from home. I didn’t take much notice of what the news was, but it was nice to recognise a newsreader for the first time in weeks. (Cool, it’s Sharyn Ghidella!)

My long trek was coming to an end, but for the English blokes seated nearby, was just beginning. They’d fluked and would be landing in time for the biggest weekend in Australian football – both the AFL and ARL Grand Finals. I told them they’d have no chance in getting AFL Grand Final tickets, but they reckoned they’d try and scalp some, or if they had no luck, just head to a pub in St Kilda and watch the game there. I wished them good luck.

Mr Belt And Braces and his family appeared to be making a little bit of a nuisance of themselves to the thankfully unflappable cabin crew, but most of us, including the bloke sitting next to me, who was flying home from Portugal via London, were looking ever happier with every kilometre. 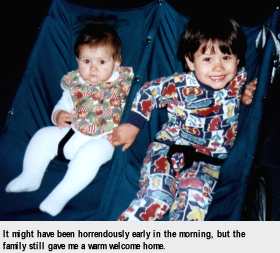 I had a feeling of elation at getting home to my family when we finally touched down at Melbourne. I don’t know if I hopped and skipped through immigration and customs, but it wouldn’t surprise me. Not that I hadn’t enjoyed being away, you understand, but it was fantastic to be home.

I realised I’d forgotten one thing. When you come out of International Arrivals at Melbourne Airport, you can go left or right to get out. Either way you can be seen by everyone waiting behind the railings, but if they know which way you’re going to go, it’ll be easier for them to get to you. I had originally planned to let L and the kids know which way I would go, but I’d forgotten. I went left, and they found me anyway. To their credit, despite the early hour, they looked remarkably happy to be there to greet me. Jeremy seemed much bigger, and Isaac’s vocabulary had improved out of sight.

With my luggage perched on a baggage trolley, we walked back to the car, as the first rays of sunlight began to appear to slowly light up the glorious Australian sky.