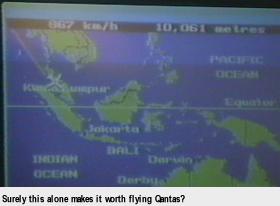 Finally flying home. The Qantas crew seemed just a bit more cheerful than any of the British Airways ones I’d had. Maybe it was just that kind of friendly barbecue atmosphere that can pop up anywhere when a bunch of Australians get together and there’s a good supply of alcohol.

After the late-night supper they offered some kids nearby a chance to see the cockpit, which left me wondering if I could successfully pretend to be 10 so I could tag along too.

The bloke in front of me kept fidgeting, trying to get to sleep, but he wasn’t as bad as the girl in front of a neighbour, who did that old trick of moving the seat back suddenly, causing a drink spillage. To the right of me was a bloke wearing a belt and braces, and behind him, some English blokes looking forward to their first Australian holiday.

We flew east, over Moscow, then south east over India and Malaysia towards Singapore. What I really liked was the position indicator. When there wasn’t a movie on, this would appear on the screen, showing where the plane was above the planet, the course it was following, and the vital statistics – speed, altitude, temperature outside, distance to landing, that sort of thing. No fancy 3D graphics, it looked more like a CGA display circa 1989, but it did the job.

At one stage to avoid turbulence we were at 11280 metres, doing a lazy 1000 kilometres per hour, and by golly, it was pretty cold outside at that height – about 48 degrees below zero. Seeing the map really made you think about all the places whizzing by underneath that you might never even visit. Well, okay, it made me think that – everyone else just seemed to be on the lookout for the steward with brunch.

Eventually we flew into Singapore, and everyone got out to stretch our legs, which after 12 hours in an aircraft seat, were in quite severe need of stretching. 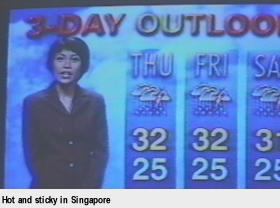 Walking around the shiny new heavily air conditioned transit lounge, you couldn’t really tell what it was like outside, but watching the weather reports on TV it sounded pretty hot and sticky, which I’m told is pretty typical for Singapore. I picked up a free airport magazine (what an odd idea) and strolled around looking in the shops, seeing what various goodies the Singaporeans would use to try to convince me to part with what little cash I had left.

We flew out again at 8pm, and had another supper, having skipped lunch due to the time difference. As the plane sped on through the night, I tried to get some more sleep, wondering if home would be quite the same after three weeks away…