It was my last day in London, and time to start seriously thinking about getting something by way of souvenirs for all of my family waiting for me back home.

There’s a very easy and cheap personalised souvenir you can get for yourself in London. All you need is a passport-sized photo. Just go to almost any tube station and ask them for a Photocard. Fill in a form and hand over the photo and they’ll give you back what to them is a transport ID card, but to you is genuine proof that you’ve been to London!

But what about everyone else? Rather than dash around different touristy shops looking for things, I went back to Convent Garden, to the London Transport Museum shop, where I knew they had all kinds of cool Londonish things, and in fact was where my sister did her souvenir shopping a few months before when she’d been in town. I ummed and ahhhed and eventually settled on a few novelty London Underground signs for relatives to put up in appropriate places in their homes: “Toilet”, “No smoking” and “Telephone”. Probably not the most imaginative thing available in the city, but I realised I was running out of time.

I was due to drop past my grandparents’ place to pick up a few things before I left England. I say “drop past”, I really mean “take a four hour detour past”, since I was in London and my plane was leaving from London – but they were in Sussex.

So I caught the tube to Green Park, where I’d emerged from the Underground three weeks before to be greeted by the chaos and splendour of London for the first time. I once again walked across Green Park towards Buckingham Palace, this time coming across the Changing Of The Guard in the Mall, rather than peak hour traffic. The whole area around the Palace was packed with crowds, all trying to get even a glimpse of a guard in a silly hat. 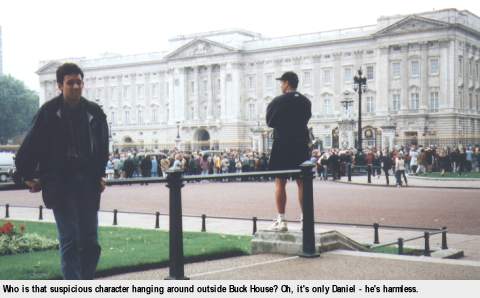 I carried on towards Victoria Station, this time taking the long way around the Palace, for the first few hundred metres walking behind a couple of London cops, which reminded me so much of The Bill. There’s not actually much to see of the Palace, except a very high and presumably well guarded wall. I got all the way around, to Buckingham Gate Road, and found the Net Cafe there, which appeared to have finally finished its renovations. Time for one last quick check of the e-mail, then I headed over to the station.

It was a little while until the next hourly train to Bognor, so I looked around for some lunch and found myself a rather splendid Ham and Mozzarella baguette. Then I phoned Grandad to tell him when I’d be there, and he said lunch would be waiting for me. D’oh!

As the train sped through the southern English countryside, I looked out of the window and realised that although I’d been having a terrific time in Europe, I would be very glad to get home. You know you’re homesick when humming a few bars of a national song (eg Advance Australia Fair or From St Kilda To King’s Cross) brings tears to the eyes. 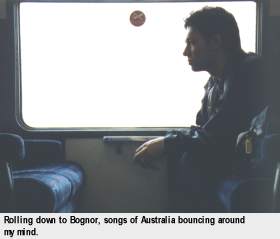 My Grandparents treated me to a hot lunch, roast chicken, the same meal they’d served when I’d first arrived. Maybe like a concert act, Gran saves her best meals for the first and last.

They gave me a huge bag of presents for the kids, and then took me back to the station. I doubt my grandparents will make it out to Australia again, so I wished them all the best and promised to get back to see them soon.

The train arrived back in London and I bolted for the tube back to the hostel. The plane was scheduled for 10:30, with check-in advised two hours beforehand. It was already about 8pm and getting dark as I walked along Euston Road (the north side, the side with less beggars on it) back to the hostel to pick up my pack. Wayne was there, recovering in the lounge from another day of substitute-teacher-hell with his little Hackney terrorists. He was so shagged out he couldn’t even muster the energy to walk to the station.

I got down to the Piccadilly Line platform and just missed a tube to Heathrow. The next one wasn’t going to Heathrow, but wasn’t crowded so I got on it as far as Earl’s Court then got off again to wait for another, wondering if I should’ve gone to Paddington and caught the super-fast and quite a bit more expensive Heathrow Express instead.

The next tube was to the wrong branch – Rayners Lane – but it got me as far as Acton Town, where the branches split. I kept waiting, bemoaning the fact that for weeks I’d been able to catch exactly the right tube train without having to wait for more than a minute or two, and tonight in my very last few hours in London, when I was running late (9:10 and counting) I had to keep waiting for the right train. It was actually only about 10 minutes, but as is always the case in these situations, seemed like much longer. 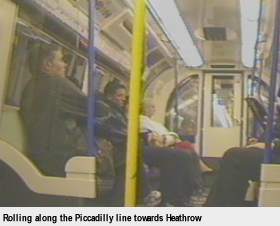 Eventually it arrived, and whisked me to Heathrow, where fortuitously the check-in queues were non-existent, apparently because I was about the last person to check-in. I went through the security gate thingy encountering a very terse security person who wanted to be absolutely thorough in making sure that my miniature torch worked, without even pretending to be cheerful about it. She’ll never make it onto Airport.

There were still a few shops open, and I spent some of my last few pounds stocking up on some obscure Cadbury flavours that we don’t have in Australia, and a newspaper that I could tuck under my arm to look exotic and well-travelled when I got home. I made my way to the gate, and there it was in all its glory, my Qantas plane, resplendent with its kangaroo tail, sitting outside the window, waiting to take me home.

I don’t think I’ve ever seen a more welcome sight. And it brings to mind this advice: When going overseas, travel with an airline from your own country. If you’re at all homesick, you’ll feel so much better when you get to the airport and see that you’re going home with your countrymen.

They weren’t boarding yet though, so I drained my phonecards by calling everyone in London I could think of to say some final goodbyes to. Then I queued to board, showed my ticket, and walked down the gangway with a huge grin on my face. I was going home.