I woke just in time to wish Wayne good luck with the first day of his teaching job for the week – as a substitute teacher at a school in Hackney. I don’t know much about Hackney except from some mentions in a TV sitcom which led me to believe it was a pretty rough area of London, and from the sounds of it, Wayne would have his work cut out for him.

I ate breakfast with a newcomer to the room, Tobias, a Swedish physical therapist on his way to Brighton for a university course. He couldn’t believe how long it took to fly from Australia to Europe, and was obviously having some trouble understanding why anybody would bother.

After breakfast I crossed the road and looked around the British Library, which as it turns out has a very impressive array of historic documents. It would appear that everyone who is anybody in the English speaking world is represented here, and entry is free – which in a strange way probably explains why it was so quiet.

Then I headed to my usual King’s Cross Tube Entrance rendezvous point to wait for Naomi, who was going to show me around London a bit. Although a Melbourner like me, she lived in London for a couple of years, and knows the place quite well. We decided to catch a tube to South Kensington and head to the Natural History Museum. A bewildering number of exhibits were ready and waiting for us, but we decided to start with the dinosaurs, because as everyone knows, dinosaurs are cool. 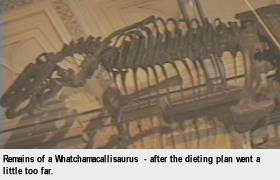 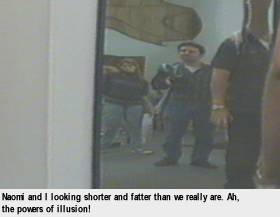 The collection of various dinosaur remains, models, footprints and various other stuff was pretty impressive, not to mention the very noisy not-quite-lifelike animated dinosaurs. We continue on to an exhibit about the human body, which managed to show all kinds of obscure bits of the body that most people (myself included) didn’t even know we had.

They also had some of those bendy mirrors which make you look really weird. An amazingly simple idea, but enough to keep simple minds like mine occupied for many minutes. It brought back memories of the now defunct Giggle Palace at Luna Park in St Kilda.

By this point, the place was beginning to fill up with rowdy school kids. Not running around like maniacs, but being raucous enough to be annoying, so we retreated away to the other side of the museum, looking the Creepy Crawlies display, which Naomi assured was extremely cool. Alas, it was also extremely shut, but after finding a welcome cafe to get a drink and sit down for a while, we trudged on and found the huge Earth exhibit. This was great stuff, with some very interesting displays about the planet: weather, the environment, natural disasters – including a very cool earthquake simulator.

There was actually heaps more to look at in the museum – you could easily spend a couple of days in there, except you’d have to hide at closing time to avoid getting kicked out. But we were museumed out, and ventured back out into the street for a walk around Knightsbridge. London’s streets being what they are, we got lost at one point, and had to refer to the invaluable A to Z to get us back on track, but we eventually found our way to that most fashionable of London landmarks, Harrods.

We squeezed through the crowds and nosed our way inside for a look around. Judging from the signs, they seemed to have a lot of departments, covering just about every niche of shopping under the sun. We confined ourselves to part of the ground floor, where a staggering number of cutesy gifts and Harrods merchandise was available. 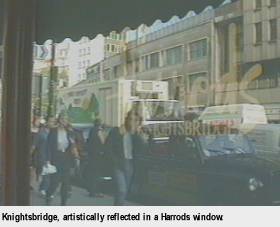 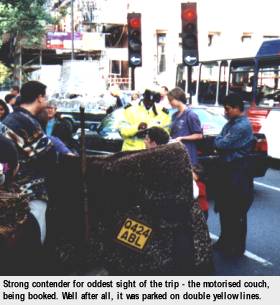 Around the corner from Harrods we found a crowd of people, a traffic policeman, a ticket being written out, and – wait for this – an armchair. An armchair with wheels. An armchair with wheels, a licence plate, a driver, and a reading lamp. Bizarre. I thought for a moment that it might be a publicity stunt, but I couldn’t see any cameras, so my conclusion, which seemed quite reasonable at the time, was that Londoners are crazy.

It was getting on, way past lunchtime, but restaurant indecision syndrome was once again present. It took until almost 3pm, when both of us were starving to actually decide on a place. We settled into a little Italian place and chomped down some pasta. The waitress was pretty surly, and when the bill came, it featured a recommended tip. I wasn’t sure what to do. At home, where tips aren’t expected but aren’t knocked back either, given the service I’d have tipped nothing. But a recommended tip? What a cheek! But I wasn’t brave enough to do anything other than just hand over the money and make sure on the way out not to look back to see the smirks on their faces.

We kept roaming along Knightsbridge (which is a road as well as a suburb), up to Piccadilly, with Naomi pointing out various landmarks along the way, most of which I confess to have now forgotten (except for Berkeley Square – Re: Nightingales.) We also passed the Hard Rock Cafe, which looked like just every other Hard Rock Cafe that I’ve seen.

We got to Piccadilly Circus, and after a quick detour around Carnaby Street and Soho (which does not have any link to Small Office/Home Office) we got back on the tube. We said our goodbyes and Naomi returned to Wood Green. I got off at Kings Cross to head back to the hostel and see how Wayne had gone.

He’d had a hell of a day, and wasn’t interested in much at all except vegging in front of the telly in the lounge. Even the offer of a pint at the pub didn’t inspire him, so I left him to his own devices and set off to see a couple more landmarks on my own. I was, after all, leaving for home the next day.

First stop was Westminster, for a look at Big Ben up close. Not too close you understand, being almost seven it was all closed up. But I did get to stand on Westminster Bridge and gaze up at it. Being such a well known thing, it is a special feeling to see it in real life for once, instead of on the titles of a Michael Dobbs miniseries.

From there I caught a Bakerloo line train to its southernmost terminus, a station by the name of Elephant And Castle. Isn’t that a great name? The station is named after the suburb. The suburb is named after a pub, which I think is one of the best methods of naming a suburb. I don’t know what the pub is named after, though it fits in with many of the other odd-sounding English pub names that you’ll hear, many of which date back to the days when including any reference to royalty or religion in your pub name could result in the authorities stripping you bare, making you run through the city in the snow, and then having a severe smack on the botty and your head chopped off. 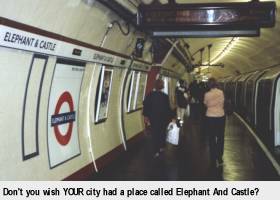 After navigating my way through a network of underground tunnels (and I don’t mean the tube system) I found the pub, and enjoyed a quiet ale before heading back. For a pub of such ancient and famous age, the decor was pretty ordinary. But I suppose at least they weren’t trying to cash in.

Instead of catching a train back, I looked around for a bus which would head back vaguely in the direction of Kings Cross. I found it, and for most of the trip I was the only passenger, at least the only one in the top deck.

The bus rumbled through unknown streets, over the Thames, past countless buildings, people, and other buses and vehicles, until we got to the familiar territory of Euston Road and I got out. I went back to the hostel, but feeling restless, I went back out again, this time for a walk around Leicester Square and Piccadilly Circus.

I found Segaworld, which looked interesting. Half a dozen floors of video games, but alas, not a single Donkey Kong or Elevator Action or Joust among them. Ah well, that’s progress. By that point I was getting pretty tired anyway, so I headed back to my comfy bed for a good night’s sleep.