Before breakfast I ventured out to find a phone box to phone home. The great thing about phoning home from a phone box in Britain is that if you’re short on cash, or you pay the home phone bill anyway and you want to save some money, you can be called back. The phone number is printed on the noticeboard inside the box. Very handy. If the person at the other end is ready to write down the number when you call, you can get this done for less than 50p worth of time calling to Australia – which I can tell you, from a phone box is not much.

The phone boxes were outside St Pancras station, on the opposite side of Euston Road. At that point it’s a divided road, and I waited at the traffic lights to cross, sticking absolutely to my decision some days earlier never to jaywalk in London.

Also waiting to cross were three other tourists. I guess they were tourists because they were talking in North American accents about something touristy-sounding. Three middle-aged women, dressed in that kind of “we’re in a foreign country and we couldn’t look more like tourists if we tried” manner – with a minimum of one bum bag each.

The traffic lights changed. The pedestrian’s friend, the green man, appeared, green and very bright and cheerful for so early on a Sunday morning. But approaching, against the lights was a police car. Siren blaring, lights flashing. The siren was loud, very loud, and making it none too clear to all around that getting in the way would be a thoroughly bad idea.

So I stayed put. And so did two of the women. After a few seconds, we all realised that one of them was crossing, despite the almost deafening noise from the siren, the police car fast approaching the crossing. The silly bunt was apparently oblivious to it, or simply reacting in the stupidest way known to humanity.

Her friends started screaming at her. Something very loud, very high pitched, and with an obvious sense of panic. I guessed it was something like “Omigodyoustupidbitchgetofftheroadbeforeyougetsquashed!”

I don’t know if Ms Frogger could even hear them over the siren, but rather than turn back, she started running towards the island in the centre of the road. From what I could see, this woman was apparently trying to make it into the 1998 Darwin Awards.

Her friends kept screaming. She kept running, in a kind of chubby, totally-unused-to-walking-except-to-the-toilet-between-courses kind of a way. She reached the pedestrian island and leapt at the traffic light pole, hugging it close, as the police car sped by. She hadn’t been in its path after all, but if she’d missed the pole, she could have achieved the possibly unique distinction of being run over by a police car on its way somewhere else.

An hour or two later, after making my phone call and having some breakfast, I met Merlin at King’s Cross Station. We’d agreed to meet at the tube station entrance in the station, although while waiting for him I realised there were two. No matter, he found me, and after a look around the station shops to try and confirm the rumoured existence of the very marvellous sounding Mars Bar chocolate drink, we boarded a train for Cambridge.

The train flew through the countryside, and we passed the hour or so to Cambridge in the usual intellectual manner, by telling stupid jokes, with Merlin threatening to get out a book to read if things got too moronic. 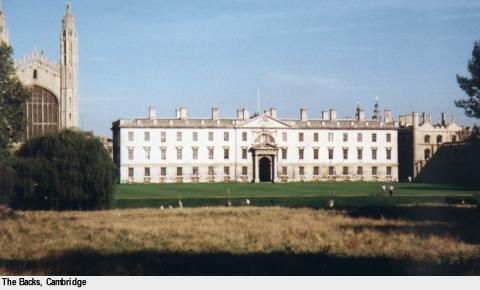 We walked from Cambridge station into the main bit of the town, chatting about, among other things, the horrors of the English banking system. From the sounds of stories from Merlin, Wayne and others, most English banks would prefer if they didn’t ever have to deal with customers, and to this end make it extremely difficult to obtain an account. You’d think they’d be pleased to be making a profit off your money, but apparently not.

After a quick stop for a drink, we looked around at the various colleges, trying to decide whether or not it was worth going in each. They all appeared to charge money, ranging from about a pound upwards, so if you visited each, it could end up costing quite a bit of money. In any case, most of them seemed to be just as picturesque from the outside looking in.

We did venture into Trinity College, but failed to find anybody to pay until just as we were leaving, when a woman in a very academic looking gown near where we were about to go out was asking someone else if they’d paid. Given that we’d seen little more than the same buildings visible from the road, and some curious signs saying that nobody should walk on the grass unless they were accompanied by a senior member of the college, we turned tail before she spoke to us, and departed at a brisk walking pace.

The laneway back to Trinity Street was adorned with various cool things, including a sun dial which would have kept perfect time if it wasn’t for Daylight Savings. 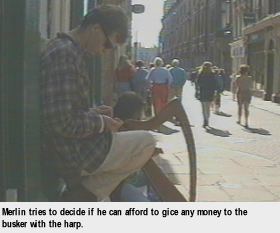 We walked on to Magdalene Street, and took time to study something we would wonder about for hours – the automatic raising bollards in the street, which will cheerfully go down for buses and taxis, but the rest of the time block off the street. How did they work? A special control in the vehicles? Or was there somebody, somewhere watching by closed circuit TV? For me it was to remain one of the great mysteries of Cambridge.

Nearby we found a crowded area of shops and restaurants, where punts get hired out. After enjoying some gourmet pizza for lunch (you can tell it’s gourmet when you don’t recognise the names), we haggled a bloke taking a punt tour out down to Ã‚Â£5, and consequently enjoyed a leisurely time floating up and down the Cam. And I must say, it’s probably one of the best ways in the world to relax. 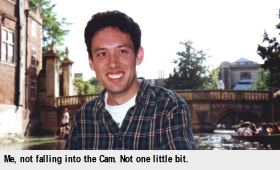 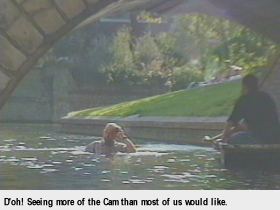 As we punted along looking at The Backs of the colleges, the (for want of a better word) punter rabbited on about the history of various colleges and bridges and things along the way, though some of the tales sounded a little far fetched. But he did a good job of steering, which was more than could be said for some of the amateurs also plying the river. They looked like they were having a lot of fun though, and I reckon I’ll have to have a go at it myself the next time I get to Cambridge.

One bloke didn’t look like he was having fun: he had either fallen in or had dropped something in and was looking for it.

We were dropped back at Magdalene Street, and carried on walking up it. Waiting to cross the street, we saw something that’s definitely the quintessential British car: a three wheeler. This is just not something you see anywhere else in the world, and probably with good reason. They just don’t look safe to me. But to see one actually working, actually being driven was a good laugh, as it brought back memories of a million Mr Bean and Only Fools And Horses repeats.

Just up Castle Street we found the remains of the old castle. In fact, there aren’t many remains left apart from the mound it sat on and a couple of beer bottles.And I’m guessing the beer bottles weren’t that old. Judging from the size of the mound, the castle can’t have been terribly big. Unless it was very narrow, but tall.

We doubled back and carried on walking along Queen’s Road, seeing the other side of The Backs, and generally wandering around the town for a few hours. Then we went back to Magdalene Street for another look at the auto-bollards and some chips and a quiet couple of beers in a quiet couple of pubs, accompanied by a game of “name that commercial” on a pub TV, something which is always more enjoyable if you’re unfamiliar with the ads.

By the time we strolled back to the train, it was well and truly dark, and as the almost empty train rolled towards London, the smell of something – possibly dope from the next carriage – wafted through the air. We never found out what it was, but got into Liverpool Street sometime after eleven.