When I woke, only one of my four room mates was both awake and present – a bloke called Wayne, who turned out to be a New Zealander in England to do substitute teaching, and to generally have a good time experiencing and exploring the country while he was there.

We ate breakfast in the hostel cafeteria and chatted about what we’d each seen. I planned to go to the Tower of London that day, and asked him if he’d seen it. He hadn’t, and decided to tag along.

So we took a tube to Bank and walked to the Tower. The streets were as quiet as I’d seen central London’s streets get in the daytime, with construction workers taking the opportunity of a quiet Saturday morning to get some construction done. There was plenty of activity at the Tower, though thankfully the queues weren’t as long as the railings in place indicated they sometimes got.

We paid our money and went in. It’s not cheap, but you certainly get a lot for your money. The Tower is not just one tower, but lots of different ones, with many and varying historical displays, varying from scary torture equipment to very shiny jewels. 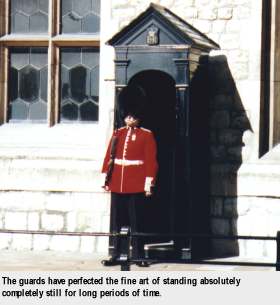 We climbed up and down the various towers, gazing at the various things on display. Some were reproductions of historic artefacts – some were the historic artifacts themselves. But some of the most fascinating stuff was graffiti which had been carved into the walls centuries ago, often by people kept prisoner in the tower. Some of it was more articulate than graffiti found scrawled on walls today, some wasn’t.

We queued up to see the Crown Jewels. This is obviously the most popular display. The queue for the Jewels themselves is set up so that it goes through about three separate buildings, past various other displays to keep the queuers entertained as they slowly trudge towards the Jewels. The Jewels themselves, when we got to them, were extremely shiny and valuable-looking, and you could see why there was an inordinate amount of security to guard them.

Walking around the grounds of the Tower, you could see plenty of very healthy ravens, obviously well fed from the proceeds of the entry fees. The Beefeaters, with their wide hats and regal dressing gown-type uniforms, seem to have taken on the role of genial guides to the tower. Meanwhile the Grenadier Guards with their enormously tall fur hats, stood completely still, or strutted around ostensibly doing military things, but in actual fact keeping the tourists entertained. 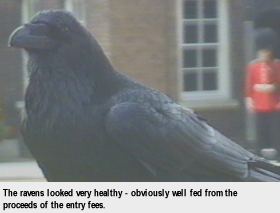 Wayne and I pondered what it must be like to be a soldier in what is such a noble tradition of military showmanship and discipline, but which has been relegated to the role of a tourist attraction.

The most prominent tower is the White Tower, in which there are loads of displays of memorabilia relating to the history of the English military, the Royal Family, and the Tower. A lot of it was very interesting, but by far the highlight was Henry VIII’s suit of armour, with its enormous codpiece. Either the man was hung like a buffalo, or had an enormous ego. Or possibly both.

Eventually we got somewhat Towered out, so we went and sat by the Thames, looking at the glorious sunshine reflecting off the water, and munching on some lunch from a nearby sandwich place.

We decided to head for Piccadilly Circus for a look around. As seems to be always the case there, there were people everywhere, and buses and taxis flying in all directions. We walked through the crowds towards Leicester Square, stopping along the way a few times to watch and listen to some of the many buskers, which as anywhere on the planet, varied from amusing to superb to crap.

After wandering around for a while, we found ourselves in Trafalgar Square. We walked around it, looked at Nelson’s column and climbed up on the lions, then we went into the National Gallery for a bit of art and culture. After all, it’s free! 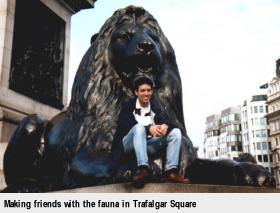 We walked around the gallery for long enough that nobody would think we were complete philistines, then we headed back to the hostel for a delicious cheap (for London) dinner.

We sat in the lounge for a while, chatting between ourselves and with others, and watching a bit of telly, before deciding to head for the pub on the corner. It was an Irish pub, part of a chain called O’Neills – no doubt an attempt to cash in on the popularity of Irish culture the world over, by painting the outside green and playing Irish music.

The sign in the window, in common with many English pubs, forbade the wearing of football colours. Wayne and I had no idea what the local football colours were, but we walked in, hoping that we weren’t wearing any. The jumper I had on was in Geelong AFL colours actually, but luckily there seemed to know (or care) about this.

Wayne and I enjoyed a beer or two, and got chatting with some of the pub goers. Particularly entertaining were a couple of Londoners, just back from a football match in Nottingham. They’d already had their share of beers, and one of them made it clear what he’d thought of Australia being beaten in the World Cup qualifier a few months before. He sounded absolutely sincere when he said, “Yeah, I saw it… I saw Australia get beaten on the telly. You should have won… I was gutted… I wept for you, honestly I did.”

Two Yorkshiremen (one with virtually no teeth) and a self-proclaimed fat Lancastrian also joined us for a pint, and I got a bit lost in the conversation as they debated with Wayne some of the finer points of Rugby League versus Union.

At eleven o’clock, as is the custom in England, the pub closed. But fear not, O’Neills had it sorted. Sure enough the pub shut, but they shunted everyone upstairs to what they called “The Music Room”, where there was another bar, a dance floor and a DJ. It kept us going for a bit longer with our beers, though the conversation, well drowned out by the music, was a bit limited.

Eventually we strolled the thirty seconds back to the hostel, Euston Road quiet in the warm night air, but for the passing cars.