The day prematurely began at somewhere around 3am when my peaceful slumber was interrupted by a knocking noise. There I was, in a hostel in Amsterdam, in a dorm of about twenty other blokes, two floors up from street level, and someone was knocking on the window.

My ears could hear what was happening. They were passing this information to my brain, which was in a state of shock at having to be active at this time of the night, and was having a hard time trying to explain what was going on. My eyes were in no hurry to open and help fill in the gaps.

“Hello?” a French voice shouted, from the sounds of it, outside the window. He knocked on the window again.

The New Zealander in the bed next to mine, whose brain was having a slightly better time of reacting to the situation, responded. The noise that came out of his mouth was largely unintelligible, but I guessed later he probably meant “…. Yeahhhh?”

“I’m locked out – I didn’t know they close the hostel at night”, said the Frenchman, who was not doing a levitating act outside the window, but was apparently on some scaffolding that my brain remembered later was up outside the front of the hostel at the time. “I can tell you my bed number…”

The Kiwi, was obviously more interested in getting back to sleep more than anything, and took the course that would get him there as soon as possible. “Yeah yeah, no worries” and opened the window.

“Thank you, thank you”, said the Frenchman, and he must have gone and found his bed without much more fuss, because at this point as far as I remember, I dropped off back to sleep again, and so did everyone else.

After getting what remained of a good night’s sleep, and doing the usual shower/getting dressed/breakfast thing, I headed back to the Central Station to meet Brigitte. She’d managed to wangle a day off work to show me around a bit more of Amsterdam.

Our first stop was Anne Frank’s House in Prinsengracht, a museum which mostly consists of a walk around the offices and secret annexe where Anne Frank and her family and some friends hid from the Nazis for two years, and wrote her famous “Diary Of A Young Girl”.

It was very moving walking through the exhibits, to look at the tiny rooms where they were all hidden away; and to watch videos describing their story, and what eventually happened when they were caught: only Anne’s father survived.

After that we strolled up Prinsengracht towards Leidseplein, which looked completely different in daylight to how it had looked the night before. We were heading to the Rijksmuseum, but on the way found a canal tour which looked interesting, and in fact they were offering a special which included a tour and entry into the museum, so we bought tickets and headed over to the wharf it was going to depart from.

Problem is, it wasn’t. The same floods that had delayed my train into Amsterdam the day before were causing the canal tour operators some problems. Apparently the water level was so high that the boats couldn’t fit under some of the bridges – that is unless they suddenly got a full tour of body builders. We decided to head over to the museum while they waited for the water level to drop or for the Dallas Body Builders’ Association excursion to arrive.

The Rijksmuseum looks at first glance a bit like an old hospital – a kind of fairly plain-looking 19th century building with lots of towers. Inside we found a long queue of people lining up to pay, which we bypassed, though nobody checked our tickets. We found a map printed in English and started exploring.

We went through the renaissance paintings, which left me once again marvelling at what some people can do with paint. And just like in Brugges, after the first few hundred paintings, you almost get blase about the endless masterpieces. But it’s worth mentioning the Nightwatch, a humungous painting at one end of the top floor. You can see it coming, right along that level, and it really is a masterpiece, an absolutely brilliant painting.

We had lunch in the museum cafeteria, then headed back towards the canal boat. They were ready to go, so we climbed aboard and listened to the bilingual recorded coverage of the various sights, which included various trivia such as one of the clock faces on the central station tower is a wind direction indicator. The boat managed to fit without any trouble under all the bridges as it made its way around the various canals. 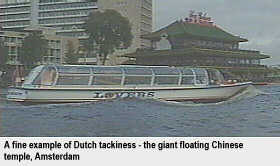 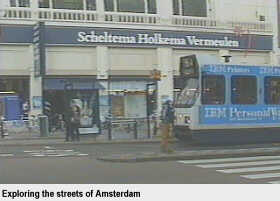 One sight along the way proved that despite their brilliant taste in city design and architecture and everything else, the Dutch know how to do tacky stuff too: just east of the central station was a gigantic floating restaurant done up as a Chinese temple.

After the tour we walked around the streets for a while, checking out shops. Brigitte invited me over to her place for dinner, so we caught a tram back to the central station, and bought a ticket for Hoofddorp, a suburb about forty minutes out of the city centre, beyond the airport. It was peak hour, and the bright yellow double decker train was pretty packed.

We got to Hoofddorp station, a quite huge, very new shining metal and glass structure, and found the bus stop. Brigitte told the bus driver in Dutch where we were going so he could stamp my Strippenkart appropriately, since I had absolutely no idea, and we found a seat. 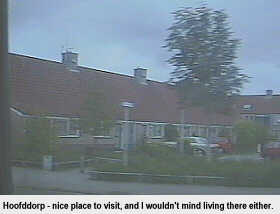 Most of the cities and suburbs I’d been to in Europe were pretty much laid out like Australian suburbs. Main roads, side streets, houses, shops. Not Hoofddorp. It was brilliant: they’d designed a suburb that was genuinely based around the movement of people, rather than cars. It looked like a terrific place to live.

The only main roads through the suburb were bus-only roads, with special traffic lights and devices along the way that looked like they would be quite unhealthy for cars to traverse. There were parallel bike paths and footpaths, and plenty of trees.

The cars were contained to minor roads, but this didn’t seem to be a problem, because hardly anybody seemed to have a car: there were very few around, either being driven or parked. But there were plenty of people strolling down the streets, cycling, or just chatting with friends. And of course, as we got off the bus, there was a sight familiar the world over: a group of teenagers discussing loudly whatever it is that teenagers discuss, with their bicycles strewn all around them.

We walked the few minutes from the bus stop to Brigitte’s house, which like all in the area was what we Australians would call medium density – three story, and compact without being cramped. I met her kids Jennifer and Rich, and after a delicious dinner, played a Nintendo go-kart racing game with them.

I can’t say I’m particularly skilful at the fine art of playing Nintendo. I rarely play video games, and in fact the last time I had played Nintendo for any appreciable amount of time was in 1996 at my mother-in-law’s house in Seattle. For the first few games Rich beat me, but as time went on, I got better and managed to win a few back.

After while I thought I’d better head back, so we walked back to the bus stop and I said my goodbyes to Brigitte. I caught the bus and train back to central Amsterdam and started to walk back to the hostel.

I decided to take a quick detour through the red light district. Not because I wanted to avail myself of any of the services (so to speak) offered, but because I’d read that it was quite interesting just to look around there. It was, and I wasn’t the only tourist strolling along there for the amusement of looking in the lit windows of the brothels at the women sitting in provocative poses, some with whips and chains on hand!

Then I walked back to the hostel and sat in the bar with a drink, writing out postcards. Had a quick game of Pacman on the machine there, then decided to have one more walk around in the Amsterdam night – to find a postbox and mail the postcards. 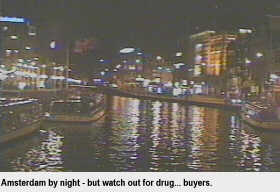 I was somewhere on an almost-deserted Staalstraat when a bloke came at me out of the darkness. “How much?” he asked.

“C’mon, I want some… how much?” He thought I was selling drugs! Me! Innocent me! A qualified professional computer nerd, who has never smoked as much as a single Winfield!

He moved towards me “I know you’ve got some – how much?”

“No! Hey – I’m not – I’m just out mailing letters, okay?” and I walked away at that kind of I’m-not-frightened-of-you-I’m-just-a-little-short-on-time speed. I found a postbox, mailed my postcards, went back to the hostel by another street and slept without any further interruption – not even any Frenchmen knocking on the windows.