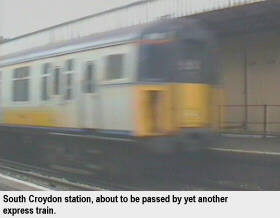 Monday: time for some continental drifting. I had planned a trip into Belgium and Holland. Originally I’d planned to go to France too, but during the first few slightly homesick and lonely days of the holiday I’d decided that spending a few days in a country where I didn’t speak the lingo, and where I had no friends to guide me around would not be a good idea. So I’d rejigged things a tad.

Hew was off to work early, so I said my goodbyes, then pottered around packing up my belongings and settling my differences with his shower. Then I set off for Brussels.

The first trick was to get to the airport. Hew had shown me in the map the way to the railway station on foot, and I tramped my way through a very large version of page 134 in the A to Z and eventually found it. South Croydon is the station in walking distance from Hew’s. East Croydon is the nearest major station, another one and a half kilometres away, which in heavy-backpack-kilometres is about ten Ks.

From busy East Croydon, a dozen or more trains leave for central London every hour. From not-so-busy South Croydon, a dozen or more trains for central London rush past at a rate of knots without stopping every hour. About four an hour stop. I decided that rather than to come to an untimely death jumping onto one of the express trains, I would wait until a stopping train turned up.

Eventually I got into London, found the Piccadilly line and caught a tube out to Heathrow. I checked in, then wandered around the terminal until it was boarding time.

The pilot seemed very courteous, announcing to us that we were flying to Amsterdam. Then he apologised profusely and said we were going to Brussels after all. I suspect we would have ended up wherever he decided to fly us.

As is the custom when travelling alone on planes, I got chatting to the passenger in the next seat, a girl called Sara from Seattle. We swapped stories of the export and corruption of our various cultures – how the Seattle Coffee Company seen in England is nothing like actual Seattle coffee shops, and how the Outback Steakhouse in America has very little food that an Australian would recognise. 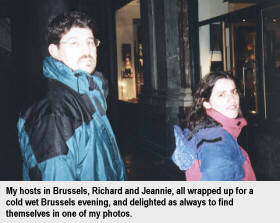 After landing we queued up at the Immigration line marked “You filthy non-EU foreigners with your weird passports and doubtful personal hygiene” and watched as the adjacent “Clean-living continentally superior EU passport holders only” vanished into thin air faster than a whisky into Oliver Reed.

As it happens, each of these queues was split into two, which resulted in a McDonald’s-like situation of us naturally choosing the wrong sub-queue: the slower one, which ahead of us turned out to have some woman who was obviously trying to sneak into Belgium to do something forbidden and had been foolish enough to declare it and consequently was involved in a heated discussion with the Immigration people.

As it happens, the Immigration lady was cheerful enough, and I found my luggage and headed for the green channel, where Jeannie was waiting.

I worked with Jeannie a couple of years ago. She and her boyfriend Richard departed for Belgium in late ’97, and when she heard I’d be in Europe she insisted I drop in and stay for a few days. We found her car and she drove me back to their flat in central Brussels, explaining some of the scary Belgian road laws along the way.

The most scary of these is that you have to give way to the right. This would not normally be a problem in itself, but for the fact that it applies in all sorts of places you would not normally expect to give way to the right – like when you’re on a main road and the people you’re giving right to are on a tiny side street intersecting with it. Sometimes they might be facing a Stop or Give Way sign, but if they’re not (and you have to look out for this, because it’s terrifyingly common), you’re the one that has to give way.

We got back to the flat, a glorious, brand new two-level place with gleaming tiles, polished floorboards and a charming view into a courtyard below. In fact, it was so nice I think I’d better stop calling it a flat and refer to it as an apartment from now on.

I met Richard, and we set off out for a walk around the streets of Brussels. It was raining a bit, in fact before long it was pissing down, but I didn’t mind, as we roamed the streets, looking at all the marvellous historic buildings. Or at least, if they weren’t historic, they were certainly old. 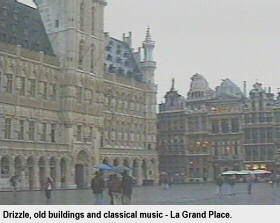 The rain let up a bit, and we found ourselves in the main square of Brussels, very suitably named La Grand Place. It might have been a dim and drizzly evening, but it certainly was grand. The huge expanse of cobblestones, surrounded by quite amazing Gothic architecture, of varying colours due to them being midway through cleaning away vehicle fume residue. There wasn’t exactly a throng of people, but certainly enough people walking around to make it interesting, and just to put the masterful finishing touches on the ambience was the classical music piped through the square.

We just stood and looked around for a few minutes, before walking down a laneway for a block or two to find Brussels’ symbol: the Mannekin-Pis. It’s the statue of a boy, pissing. Taking a whiz. Having a leak. Doing a wee. Spending a penny. Having a slash. Urinating. He stands on a street corner, letting it all hang out, the water flowing twenty-four hours a day, while tourists like me (and probably locals too) watch and take snapshots. Sometimes he’ll be dressed up in costumes – an Elvis suit was on display nearby when we were there.

After a good chuckle and a moment of quiet contemplation at the sense of humour the Belgians must have to let something like that be a national symbol, we set off down more narrow cobblestone streets and through glorious arcades to the restaurant district. We found it and wandered around, reading menus and generally being indecisive.

We found somewhere that looked good. Alas, they were full, but it’s worth describing the place. The entire restaurant was backwards. The food was stored in the window. We went in and found ourselves in the kitchen, and further back we could see all the tables. Weird. Not to mention the bloke with the severe humpback who appeared to be the chef.

Another restaurant had a very prominently displayed name of “Drug Opera”, but the menu was completely normal.

In the end we caught the Metro back to Richard and Jeannie’s street, and headed for one of their usual haunts, Pablo’s Mexican restaurant. So I found myself seated at a table of Australians, eating Mexican food in a restaurant run by Belgians, and chatting merrily about all the news from home.

After absolutely stuffing ourselves, we headed back to the apartment for more chatting and to laugh ourselves silly over an episode of Shooting Stars we found on BBC2 on cable.