I’d arranged to meet Merlin at Oxford Circus tube station to do some shopping. Now, for those of you who’ve never been to Oxford Circus, it’s a very crowded place, day or night, seven days a week. Like many places in central London, a large proportion of the human race finds themselves there, arsehole to bellybutton, roaming around doing whatever it is they happen to feel like doing. And that is why we made very precise meeting location instructions: the north east corner of the intersection, next to the tube entrance.

This plan worked like a charm, and we set off to explore Regent Street’s many fine shopping establishments. First on the list was Hamley’s, generally known (and I’m not about to argue) as the biggest toy shop in the world. We decided to start at the basement and work our way up through to the sixth floor. As it happens, the basement includes a cafeteria: not an outstanding one, but they did serve edible food which performed quite reasonably in the role of lunch, and at a not too monstrous price (well, at least not to monstrous for London, which tends to lean just slightly towards the monstrous side in the money department).

Then up we went through the floors, pushing aside bratty kids in an effort to see all the cool stuff. Well okay, we didn’t really push aside bratty kids, we just fantasised about it. Well, okay, I shouldn’t really speak for Merlin on this, but I fantasised about it. Novelty toys, Lego, video games, board games, model trucks and trains, an army of TV/movie miniatures, card games, fancy dress costumes, practical jokes… if it was anywhere even remotely within the realm of toys, you name it, they had it.

We made a special stop at the model rockets, the water-powered variety being something that Merlin and I used to dabble in from time to time when we were kids. You’d fill the rocket with water, then put it into a special launcher pump, which you used to increase the pressure, then pull the trigger, and POW, off it’d go into the sky. After rapidly climbing for a dozen or two metres, it would then plummet back down to earth, ready to be retrieved for the next launching. And who says NASA pioneered reusable rockets with the Space Shuttle?

One time we headed to a local park to launch a few missions off, and when noticed by some other smaller kids we attempted to dazzle them by holding our fingers to the air, ostensibly to check wind speed, and spouting all sorts of trajectory and flight path mumbo jumbo before performing the launch. They probably just thought we were complete nerds, but hey, it was fun anyway.

We got to the top floor, and woke up a card trick set rep who was just about falling asleep at his display table. He showed us a little trick card pack he was trying to flog – for Â£4.95 you could try and be David Copperfield, though you didn’t appear to get Claudia Schiffer as part of the deal. Actually, it wasn’t really on David’s end of the cool scale. It was probably closer to Wally The Magnificent from The Wiggles Movie.

Merlin was on the lookout for anything suitable as a birthday gift for one of his flatmates. He thought he’d found something, but wasn’t sure, so we decided to mull on it and come back later. So we set off back down Regent Street exploring. 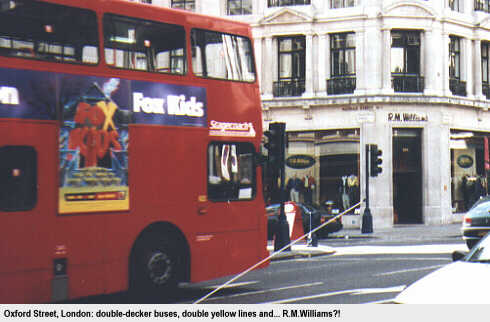 A welcome and familiar sight greeted us on Regent Street: an RM Williams shop, all this distance from home. Quite a surprise, and they seemed to have much the same stuff as at home. I found myself speaking slightly stronger Strine in front of the sales staff, just to give them the non-too-subtle hint that I already knew one end of a Drizabone from the other.

We spent the rest of the afternoon wandering happily around Regent and Oxford Streets, dodging the large numbers of people, exploring whichever shops looked interesting, taking photos on behalf of (other) tourists, slurping down hot chocolates and/or coffee and cake. In the end, Merlin’s flatmate got a present from Hamley’s, and we parted and I headed back to Hew’s place in Croydon.

The place in Melbourne (in Exhibition Street) appears to be run by Mongolians, or at least people who look the part. It’s hidden away up some stairs from the street. The decor is pretty plain, the tables look like they were remaindered from a secondary school. But when the chef cooks your food, he does so with a kind of showmanship, scooping your food off the barbecue and back into your bowl with one flick of the hand, in a real flourish, with the kind of skill that you speculate could perhaps only be learnt by a real Mongolian. You return to your table and munch happily until it’s time for the next helping.

The place in Croydon is run by white English people, which throws you a bit at first. But the decor is amazing, the low hanging curtains from the ceiling and lighting really giving it a great atmosphere. The chef, another white Englishman, cooks your food on the barbecue, but alas without the pizzazz of his Melbourne counterpart. You return to your table and munch happily until it’s time for the next helping.

If only these two places could get together and swap notes.

Hew and I munched happily and slurped down beer, before returning to Hew’s place and a well-earned (well, reasonably well-earned) kip.