After packing my pack, I strode purposefully out of the hostel and down the street to Edinburgh’s Haymarket station. Okay, so “strode purposefully” is probably an unfairly muscular-sounding description. But “staggered” wouldn’t be fair either. It was probably something between the two. Perhaps just “walked”. Anyway, I boarded the 09:44 train bound for Inverness, some three and a half hours away.

Just out of Edinburgh, the train went across the Forth Bridge, which goes over the Firth Of Forth. The bridge is utterly massive, a mile and a half long, a very impressive testament to the engineers who built it last century. Unfortunately, the best place to see the bridge is probably not from the train, where all you can see are the huge girders flying past the window. But the parallel road bridge looks equally massive, if not quite as picturesque.

The train continued north, and the further north we got, the better the scenery looked. Rolling hills, speeding rivers, remote farms, tiny villages. We stopped every so often at places with weird and interesting names, like Avie More, Inverkeithing, Dalwhinnie, and Perth. 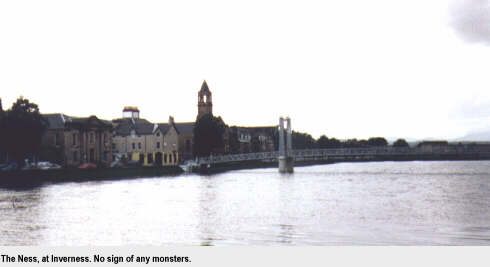 We eventually rolled into Inverness, and I alighted and got my bearings, checked my map and figured out what I was going to do next. Plan A was to stay in Inverness that night, then head to the tiny village of Plockton to stay on Thursday, returning on Friday to Inverness, and catching the Friday night sleeper train back to London.

First I needed somewhere to stay in Inverness. Consulting the Lonely Planet guide stowed in my backpack, I decided not to stay at the official YHA hostel, which was a mile or two east of the station, down some side streets, left then left again oh no was it left then right oh bugger now I’m lost where did I put that map… Instead I decided on a closer hostel, which from the description sounded hospitable enough. I gave them a ring and they reserved me a bed.

But to make sure Plan A was feasible, I also had to find somewhere to stay in Plockton the following night. The Lonely Planet guide gave a handful of Bed & Breakfast numbers. So I found a phone and rang the first.

In the following dialogue, try to imagine, if you will, the accent of a middle-aged Scots woman. It’s my personal opinion that there is no more delightful accent than that of a Scottish woman. The adjective “lilting” was just made for it.

I rang, with the appropriate prefix from Inverness, 220.

But no luck there either. The money in my phonecard was slowly draining away, and it looked like the entire population of the world had decided to stay in Plockton on Thursday night. So, I called an Extraordinary Daniel Travel Committee Meeting. I moved a motion, seconded by me and carried by a majority of my brain, to adopt Plan B.

Plan B was to just spend Thursday in Plockton, but return to Inverness and catch the Thursday night London sleeper train. The train timetable seemed to allow it, so I went and booked the sleeper compartment and paid the Â£29 the sleeper would cost me – in addition to my Britrail pass – and then put the backpack on and tramped off to the hostel.

My walk took me through the main shopping part of Inverness, where my stomach once again reminded me it was well past lunchtime, and that the quick consumption of food would be an ideal solution to hunger. So attempting to avoid a long walk around looking for food while lumbered with the backpack, I did the unthinkable and succumbed to the pleasures of the Inverness McDonalds.

Afterwards I kept going, up the hill past the castle, to an area where there used to be a plethora of various backpacker’s hostels, until the YHA one moved away. But there’s still two, and I found the one I’d rung, found the room and bed I was allocated (they all had names to make it easier), plonked down my pack and headed out again to explore.

Inverness was (and probably still is) a lovely little town. I looked around the town, making my way down any street that looked the least bit interesting. There was a lot of hustle and/or bustle around the shopping area until about 5pm, then things quietened down a bit, but as I walked around, there were still a few people heading for restaurants and pubs and the like.

I walked down to the River Ness, which leads into Loch Ness, home of the famous monster. Well, perhaps it is – I haven’t seen it myself. I had (perhaps foolishly) elected not to go up to the Loch for a bit of monster hunting, as I was determined to avoid doing too many of the really touristy clichÃ©d activities.

But I did train my video camera on the river and shoot a bit of out-of-focus footage of a stick in a doubtful attempt to convince everyone at home that I might have spotted the monster. I also spotted a grey heron enjoying some dinner, thanks to it having secured a place higher on the food chain than the eel it had found.

I began my own wander in search of food, which took a while as usual, but I got to explore a few more streets around the town. Eventually I settled on a cosy looking pub, and chose the intriguing sounding Macaroni Cheese And Chips from the menu. The appeal was not that macaroni cheese or chips were strange to my palette, because they aren’t, in fact my palette greets them like old friends whenever they arrive. The appeal was that the mix of macaroni cheese and chips in the same meal was not something I’d experienced before. The cheese sauce was sticky and gloppy, the macaroni hot, the chips on the side of the plate crunchy. They went together surprisingly well.

I chomped down my food to the accompaniment of one of Scotland’s fine lagers, pondering life in general, watching the other pub-goers trying their luck on the poker machine, and letting my palette have a big party to celebrate the unlikely coupling of these two great tastes in the one dish.

Then I strolled, in a relaxed state of mind, back to the hostel, and sat in the lounge, writing more postcards, chatting with a few other hostel-goers and listening to the bloke at the front desk greet people with his authentic Australian accent, which somehow sounded much stronger than it would’ve at home. Then I went upstairs to the room, settled down in my bed, which was called Mr Hyde, and dozed off to sleep.