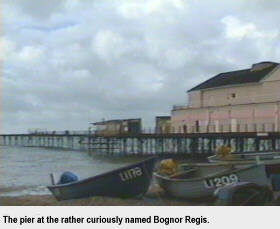 Saturday arrived, and with it the chance of some time with my uncle Kevin, his wife Liz (does that make her my Aunt-in-law or something?) and my cousins Sarah and Luke. Kevin was actually working in the morning, poor soul, but I headed over to their house in Bognor Regis in the Grandad-Fiat-o-mobile early for a chat and a walk around the town with the others.

The “Regis” in Bognor Regis takes its name after the royals, when the town decided about 60 years ago to append the suffix in honour of the king of the time, George V, who was reputedly pretty ambivalent about it. Actually I’d be more interested to know where the “Bognor” comes from. It’s not exactly the most appealing name in the world, but Britain is full of names like that, the origins of which have been lost in the mists of time.

(Actually, the minimal research I have done seems to indicate that it was named after an ancient Saxon settlement called Bucgrenora, though why they called it that is anybody’s guess. Any ancient Saxons who would care to e-mail me any comments are welcome to.)

Liz, Sarah, Luke and I walked around the town for a bit (well, to be entirely accurate, Luke was pushed around, since he was just a baby), poking around in the shops, gabbing about the differences between England and Australia. Some names, like Safeway and Woolworths, were familiar, and in the case of Safeway, much the same. They have Safeway in America too; in marketing terms it must be a tried and proven name for a supermarket. Either that or there was an Ernest Safeway who thought up the whole idea. 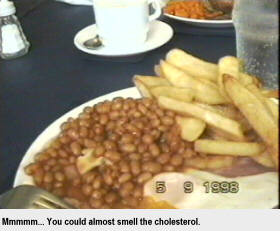 Other names, like Dixons, Superdrug and Marks & Spencer were less familiar, but a quick glance in the window revealed that they were pretty much the Chandlers, Priceline and Myers of England.

Every time I spotted something remotely Australian, I’d stop, point it out and make excited gurgling noises, before explaining its significance with a little lump of pride in my throat that something other than me had made it across the world. Bananas In Pyjamas, Neighbours, Home and Away, not to mention Savage Garden and of course Fosters. Okay, so perhaps some of the things aren’t exactly the best that Australia has to offer, but it’s nice to know that while we as a country embrace things from cultures around the world, a little of our culture gets embraced elsewhere too.

Suddenly it was lunchtime, and we settled into one of those quintessential English cafés, where you imagine they’d probably stare at you like you had green tentacles growing out of the top of your head if you dared to ask for something that wasn’t fried. The kind of place that might be called the Cholesterol Café, and if it were more downmarket (eg more vinyl), would be frequented by people who pronounce it “Caff”, and go there early in the morning to meet with shabbily dressed detectives to sell information to over a cup of tea, like in The Bill. 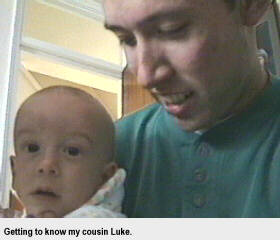 Getting into the spirit of things I ended up having egg, chips, baked beans, sausage and ham (but no spam). And it was thoroughly delicious, even if it did catapult me a few hundred metres closer to Heart Attack City. But nobody called me guv’nor and nobody ran out midway through a cup of tea shouting “you coppers are all the same; I ain’t telling you nuffink, Lefty will fix me if I do!” My illusions were thoroughly shattered.

After that we staggered up to the rellies’ flat and awaited the arrival of Uncle Kevin, which didn’t take long. That gave us a chance for some more chatting, and for me to get dribbled on by Luke. Then we all went and piled into Kevin’s tiny car and headed for the Amberley Museum.

The drive to the museum took us in cramped comfort through some more of that gorgeous English countryside with winding roads through green pastures. It’s so damn picturesque you can bet the British tourist authorities are cursing that they can’t charge people for looking at it.

Now, in the world, there are museums and there are museums. There are the old, dead museums in huge, badly heated buildings with lifeless exhibits and people trudging around basically out of guilt because they’ve paid their $5 to get in and now they feel they have to stay the prerequisite number of minutes to get their money’s worth and preferably find something even the least bit interesting otherwise whoever they’re with will be telling them “see, I told you it would be boring” all the way home. 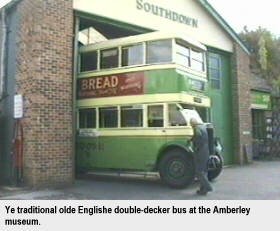 Then there are those museums that actually have interesting things, are in well kept buildings or generous outdoor sites, with rides and interactive displays to keep the little kids and adults with short attention spans amused, bits of history for those who are interested in such things, and a nice variety of displays, without so much of one thing on display that it’s mindnumbingly boring. I’m happy to say that most museums are switching to this way of thinking, and the Amberley Museum is one of them.

It’s an industrial museum – old machinery, old communications equipment, old vehicles, all that sort of thing, with a bit of olde style art and craft thrown in to keep the less blokey amused too. We wandered around happily looking at the various stuff, and enjoying each other’s company, taking surprise photos of one another, generally having a laugh. 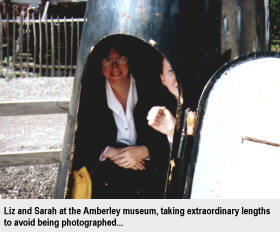 After a few hours spent in the museum, we headed back to Bognor to the flat, ordered in Chinese food and watched a fairly harmless movie and a surprisingly interesting TV show about wacky British drivers, before Kevin drove me back to my grandparents place.

So, a nice day of relaxation with the rellies, but the holiday was just beginning: Tomorrow I would be heading north.