The check-in chick asked me “Just going to London today, Mr Bowen?”
Ahem. JUST London? Isn’t that far enough to be going? It’s halfway around the world for heaven’s sake. Perhaps being booked to go on to Portugal via Greenland and Luxembourg might have made her job more exciting.

Leaving my family at the doors to International Departures really underscored to me what a bloody stupid idea this trip was. It seemed sensible enough a few months ago: go travelling, have a break, avoid feeling tied down, avoid dragging small kids across the world in confined spaces… But when it came to saying goodbye for a month, how much I was going to miss them all became blatantly apparent. 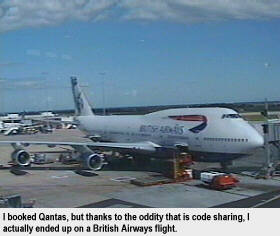 Although I booked with Qantas, thanks to the oddity that is code sharing, I actually ended up on a British Airways flight. There’s only one thing I don’t understand about code sharing, and that is: Why do they do it? Why bother? The moment you lay eyes on a BA plane, you know it’s not really run by Qantas, so why even pretend by giving it a Qantas flight number? It just seems to complicate things by having two separate flight numbers for the one physical plane.

The BA crew seemed pretty jovial, but they would be; each crew got off the plane each time we landed. Apparently none of them were really up to the prospect of 25 hours flying time from Melbourne to London. Probably just as well. If they fell asleep on the job it would make a terrible mess, one way or the other.

I spoke to a friendly Liverpudlian on his way from Sydney to Bangkok. We commiserated each other on the state of the Australian dollar – he’d been working in Australia for months, so it was all he had left. What a time to go on holiday in Europe. Or anywhere, for that matter.

Gleefully opening my duty-free bag on the plane, I discovered that the camera I bought the day before appeared to be missing its manual. I eventually worked out what most of the buttons did, but I made a note to chase them down when I got home.

We stopped in Bangkok for just long enough for me to lose my new jumper – which I’d never actually worn and had brought along in readiness for the freezing cold of the Scottish highlands and the not quite freezing cold of a 747 cabin at night.

I thought I’d left it in the Transit Lounge, but when I realised I didn’t have it and went back, I couldn’t find it. All the officials were very helpful, but couldn’t actually give it back since it hadn’t been handed in.

After extended periods of walking around looking for it and quizzing Lost Property, eventually I gave up on it. And then about ten minutes after take-off, I remembered where I actually left it – on a railing upstairs from the Transit Lounge. D’oh!

And since I wouldn’t be flying back via Bangkok, there was no chance to pick it up on the way home. I can only hope that it eventually found its way to somebody who can use it.

We were told that the flight path would take us over India, Pakistan, Iran, Turkey, Eastern Europe and Germany. The prospect of flying over Iran made me feel a little nervous to tell you the truth, but as the lights of exotic and unknown villages, towns and cities passed below us the nervousness gave way to curiousity about life for the locals down there.

But who could be distracted by matters such as toilets and lost jumpers when the prospect of a few weeks’ exploration in a new land beckoned?