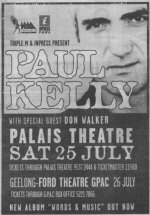 Last night found me seated with a few friends in row F of the Palais Theatre stalls, once again watching legendary musician Paul Kelly and his band in a dazzling performance of masterful rock’n’roll. A satisfying blend of songs from the new album and old favourites too.

But what’s also worth mentioning was the support act. Don Walker, apparently one of the geniuses behind Cold Chisel
anthems such as "Khe Sahn", managed to play a set so depressing, so agonisingly painful that I think those audience members who weren’t applauding him for finally finishing were busy looking in their pockets for razor blades to slash their wrists with.

I’d heard rumours that Don’s songs were not exactly cheerful boppy numbers. One post on a mailing list I’m on had mentioned songs of the "We’re all going to die" genre. I obviously misunderstood that posting a bit, because I was quite unprepared for the moment when Don launched into one of his songs, that is actually called, and concerns itself with the fact that "We’re All Gunna Die".

That may be true, but everybody cheered up when the support act finished.