Well, after allowing people to vote yea or nay on the whole facial hair question for a week, the results were as follows: 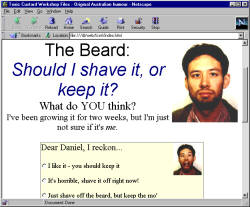 Quite a few people suggested going the goatee. Given her stance on this issue, this might have been all my sister’s friends, I don’t know.

It should be noted at this point that no matter what the results, I was never intending to blindly follow the advice of you freaks and lunatics who go a-surfing through my Web page. No, the decision will be mine, and not much correspondence will be entered into. It’s my face, my decision.

The whole vote thing was just a bit of fun. I’m sure you understand. Just a ploy used in my never-ending quest to help people waste their time.

I won’t decide quite yet anyway. My sister’s boyfriend John, who having ventured into the world of hairydom knows about such matters, recommends leaving it at least four weeks before making a decision. As I’m at three and a half weeks now, I may as well wait just one more week before the choice gets made.

I have to say though – it’s not looking good for the beard. Maybe the itching will fade, but I’m still not sure I like the look or feel of it. Mind you, if it counts – and I’m sure there are many who would say that it does – my wife likes it.

The oddest thing is looking down past your nose, and seeing a tuft of hair that you’re still not used to. And yes, I have unintentionally caught food in it. That alone may tip the scales in favour of going back to shaving. It’s a difficult thing to describe, but in its own little way, it was a truly revolting experience.