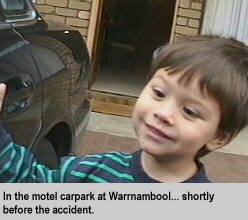 This morning, I had my first car accident.

Nothing serious, nobody hurt, though I did get a bit of a cut to my head, which still hurts.

It was in the motel carpark. I was packing the boot and hit my head on the lid.

(My sister nearly freaked when I was telling her that story.)

After packing up (how it is that the same amount of stuff you started with suddenly takes up more space?) and checking out, we headed back to Allansford and the wonders of Cheeseworld. Cheeseworld isn’t quite as impressive as the name suggests, but it’s not at all bad. At least that have some cheesey Cheeseworld memorabilia, as well as such delights as chocolate cheese.

We then took a quick detour back into Warrnambool to another McDonald’s for lunch – only because we’d noticed they had one of the most truly impressive McDonald’s playgrounds I’ve ever seen, and when travelling with a toddler it’s important to let him have a good chance of using up some of his boundless energy. Alas, the cool bit – the big sailing ship – was closed for repair. We also made sure to fill up with petrol (ugh, don’t get me started on country petrol prices) before heading back along the inland route – the Princes Highway – towards Melbourne. 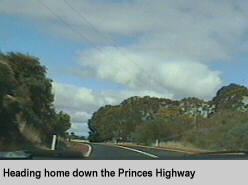 The highway is a lot less challenging to drive along than the Great Ocean Road – but busier too. We stopped off in Camperdown where the very nice SES volunteers furnished us with free Kit Kats and coffee. The next stop after that was in Winchelsea, which curiously isn’t any where near the sea. But the tea rooms there do a stunning iced chocolate.

From there we headed straight back into Melbourne, getting off the freeway in South Melbourne just in time for rush hour, and a long traffic jam getting onto Kingsway. D’oh! Ah well, it was the first and only traffic jam of the trip. And we were home by about 6:30, by then more than ready to put our feet up and order in for a pizza.