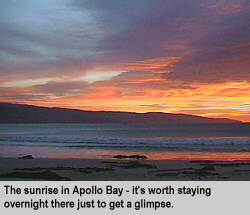 Now let me tell you a little secret. The sunrise in Apollo Bay is spectacular. No, it’s S P E C T A C U L A R
. A brilliant red glow appears in the sky over the ocean, lighting up the beach and the mountains. Okay, so I don’t know if it’s like this every day, but this morning’s was, and that’s good enough for me. It’s worth staying overnight there just to get a glimpse.

After scoffing down some breakfast, we continued down the Great Ocean Road. At this point the road heads inland a bit, through dense forest. It’s no less twisty though – I presume it follows the contour of the mountains. It actually felt more challenging to drive along, because you’ve got no idea of what’s around the next corner. After a while it starts to feel like a video game, there are so many little tight turns and so on.

We spotted the turn off to detour into the Otway National Park and followed it, along a precariously narrow road, down to Cape Otway. It only looked like a short distance on the map, but seemed to go for ever, up and down and around hills, over cattle grids and among roaming cows; it was most entertaining. We finally got to the end, and discovered that the only way to get a 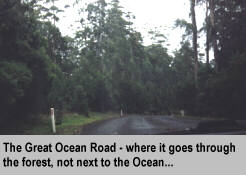 look at the Lighthouse was to wait for a guided tour to begin. Rather than wait, Isaac and I trekked up to a lookout at the top of a mountain, and looked out across the Cape, the lighthouse, and the ocean, while trying not to let the strong wind blow us off the mountain.

Wa-a-a-a-ay further on down the road, we stopped for lunch. By this time it was pissing down rain, and something hot seemed like the best idea. I’m not sure what the town was, but looking at the map later I guessed it was Lavers Hill. In fact, more of a speck on the map than a town. Anyhow, wherever it was, the place did some very nice pies, and doubly-nice triple-chocolate muffins.

When we continued onwards, it was still raining. L and I were silently swearing at ourselves for being stupid enough to go on a three day trip without bringing coats or umbrellas, but out in the middle of nowhere there wasn’t much we could do about it, so we just hoped for some lucky breaks in the weather when we actually needed to get out of the car. 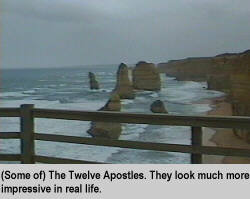 The road got back to following the ocean, and it’s at this point that a whole bunch of landmarks appear on the coastline. And they, like an Apollo Bay sunrise, are spectacular. We got out of the car at the Twelve Apostles, walked down to the viewing platform and … gasp … there they were. Incredible. The only thing I can compare it to is the Grand Canyon. You see pictures of these things, and you think "oh yeah", but when you’re actually there, looking at them, it’s clear that all the pictures in the world can’t do justice. They’re just too impressive and big for pictures to adequately capture them. Not that it stops me taking pictures of them, of course.

The weather by this point wasn’t wet, but it was cold, so while awed by the sights along this stretch of the road, we didn’t stay at any one for too long. We stopped at Loch Ard Gorge, Sentinel Rock, The Arch, and what’s left of London Bridge (half of it fell down in 1990). Each was kind of equally impressive. Thank God for soil erosion, that’s all I can say. Without it, these brilliant landmarks wouldn’t exist. 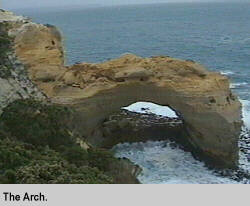 Just after Sentinel Rock, going through a town called Port Campbell (which looks tiny until you go over a hill and the rest of it appears) the road appeared to go off inland again. After about 10Ks I had a sneaking suspicion we were heading in the wrong direction. We headed back, and sure enough found the turnoff we’d missed – along with the huge sign pointing to it.

We stopped again in a tiny town called Peterborough, which seems to consist of bugger all. There’s a sign pointing to the town centre, which we followed, but all we found was two shops and a petrol pump. I think that was the town centre. But no matter, they had a good range of afternoon-snack food, which we gobbled up continuing on..

After Peterborough and another stop-off for the very spectacular Bay Of Islands, the road goes off inland towards Warrnambool, but by this point we were into farming land, and the road was (more or less) straight for miles at a time. At a place called Allansford, just outside Warrnambool, we passed a big place called Cheeseworld, which we made a note to visit on the way back.

We reached Warrnambool late in the afternoon and found our motel, before taking a walk around the town. Having been there twice before, we were a bit more familiar with where things were, and the perils of crossing at the town’s many roundabouts. No cable in this motel, but we settled down to another quiet evening of rest from a busy day’s travelling.