As planned, after some exhaustive packing (I think we managed to fit most of the house inside the boot) we set out this morning for our first big trip in the new (secondhand) car. We headed over the Westgate Bridge and down the Princes Highway towards Geelong. This time we gave the rest stop near Little River a miss – last time I was kind of disappointed by it compared to the rather more elaborate rest stop we encountered in Arizona a couple of years ago. On the other hand, here they don’t feel the need to include a notice telling you to leave your firearms in the vehicle…

We finally stopped in Geelong about lunchtime, after wandering around looking for somewhere enticing to eat. Nothing too ambitious or exciting – we were really just looking for a Hungry Jack’s – not necessarily because the burgers are better (even if they are) but because we had some coupons, which would have almost got us away with eating their food and them owing us money.

As it was, we hadn’t determined the location of Geelong’s Hungry Jackses before we set out, and by the time we passed what seemed to be the fourth or fifth McDonald’s, we decided that our appetites needed desperate attention, and that Jack was out of luck – our cash would be going to their arch nemesis. But hey, McDonald’s food may be predictable, but at least it’s predictable.

After eating and a quick consultation with the Melways, we found the Surf Coast Highway, which would lead us south to Torquay and our target: The Great Ocean Road. Actually, we needn’t have checked the Melways, because there were big signs posted all over the place saying "To the Great Ocean Road". At Torquay, the Road actually began.

Just beyond Torquay is Bell’s Beach, home to some famous surfing carnival. We saw the turn-off and decided to have a look, before discovering that the surfing carnival was actually happening. The result? Lots of driving around carparks that despite being in the middle of nowhere, miles from civilisation, were jam packed with cars and loads of surfie types moseying around in their wetsuits and extremely cool sunglasses. After many minutes of trying in vain to find a spot to park, we gave up and went on a few hundred metres, where there was a spot to park, and an accompanying spot to look over the famous beach, and admire the surf from afar.

We continued down the Great Ocean Road, and shortly after leaving Bell’s Beach we rolled into Anglesea, keen for a bit of a break from the car. Anglesea has a charming little shopping strip, very nice, very tidy, and so quiet that you can only hope it gets busier at the weekends, because if it’s this quiet all the time then all the shops will very soon go bust. Since it was a reasonably warm day, we partook of some of the local icecream treats, before getting back in the car and onto The Great Ocean Road proper. 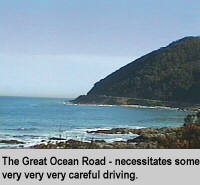 I say "proper" because it’s at Anglesea that the road actually hits the ocean. And sticks to it. The road goes for a couple of hundred kilometres total, and most of it weaves its way along the mountainside right next to the sea. It makes for spectacular views, and necessitates some very very very careful driving. The road is clearly marked, but if you weren’t paying attention for a few seconds, you could very easily go over the side into the sea. In fact, the weekend before we went, someone had done exactly that. It’s a bit of a challenge – they should make car stickers that say something like "I negotiated the Great Ocean Road and lived to tell the tale", or at the very least give you some Good Driver Points for managing it. In fact a little certificate, a handshake and a rebate on the car insurance premium wouldn’t go astray either.

So, keeping my eyes glued to the road, we headed down the road, and began to dig into the stack of cassettes in the glove box, since the radio stations had all faded from view. Every so often slower speed limit signs would appear and we’d go through some little town that you can presume survives mostly by tourism from the road itself. We didn’t stop, but tried to keep moving as the afternoon was wearing on, and our motel room in Apollo Bay was waiting for us. 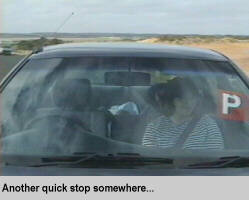 Where we did stop was at a few scenic lookouts, to get out and gawp at some of the amazing scenery. Who would believe that the simple combination of ocean, beach or cliff face, road and mountain could be so picturesque? We’d take some snapshots, breathe the fantastically fresh air, and continue down the seemingly increasingly windy (and I mean with lots of winding, not lots of wind) road.

Just a few kilometres from Apollo Bay, something far more spectacular than any scenery appeared. Isaac, who was being very well behaved in the car considering the long distance we’d covered, called out to us from his seat. It was a precursor, a warning, because just seconds later, the most spectacular puke erupted from his little mouth.

The icecream from Anglesea, the cheeseburger from McDonald’s, and every other little snack he’d nibbled on that afternoon, all flew out of his mouth and onto the (thankfully vinyl) back of the seat in front of him. As soon as possible I found a safe spot and we made a Vomit Clearup stop. Isaac was surprisingly cheerful about it, at least once we’d wiped him down. We got the worst out of the car too, and thanked whoever might be listening that it was a nice day and that we could continue on with the windows down.

Soon afterwards we reached Apollo Bay, our first scheduled overnight stop. We booked into the motel, got our stuff unpacked, and proceeded to explore, first having a play on the very picturesque beach, then letting Isaac romp around in the playground. Then we walked up and down the main street, trying to work out where the best place to eat would be. As it happens we took the easy "with two kids" way out and got takeaway fish’n’chips to eat back in the room. We lazed around that evening watching the Discovery Channel on cable, and rested in readiness for the next day.