Today we went for a spin in the car. Out the driveway, along the highway, onto the freeway, down to Geelong. Geelong is about 90 minutes from home in the car, and is home to the world’s greatest AFL team (shame they keep on getting losing all their finals games). 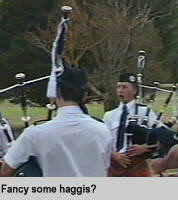 Our target was today’s Highland Gathering, in a park in the suburbs of Geelong. Despite the scary looking queue of cars going in, and the even scarier prospect of finding a car-sized spot to park, we got in and walked around, gazing in wonderment (is that a word?) at the haggis throwing, tug of war, archery, bagpipe bands, and trying to work out a way of looking underneath a few kilts, possibly with the aid of mirrors.

For lunch, L was brave and foolish enough to try some haggis in a roll (a kind of HaggisBurger – you can see McDonalds putting that on the market, can’t you – McHaggis) whereas I stuck to the more traditional (well, in the Australian sense) sausage sizzle. It’s worth pointing out that despite L’s bravery she didn’t feel so good afterwards, and demanded that I cease speaking as soon as the topic of our conversation got anywhere near to sheep’s stomachs.

All good fun stuff though, and listening to the pipe bands makes me wonder if somebody shouldn’t make an alarm clock that kicks you out of bed with the sounds of a massed bagpipe band. I know it would encourage me to get up in the morning.

Before we left, we made sure to call up L’s brother Dan on the mobile phone. Being a piper himself, I’m sure he would have loved to have been there. But since he lives in Seattle, the chances were pretty slim. He wasn’t in, but so I left a message saying we thought he was there in spirit, accompanied by a minute or so of some of Victoria’s finest pipers.

Postscript: Actually, Dan was in. He couldn’t hear the phone. Because he was playing his bagpipes.