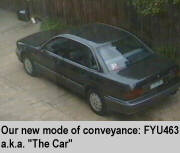 All went (nearly) to plan on Tuesday. There was a little mishap with the bank involving a delay in them coughing up the car loan money, but the bank staff very kindly handed over the bank cheque despite the delay, but failed to mention that this would mean our everyday spending account would be about $9000 overdrawn… Kinda bad luck if we needed any groceries that night.

But that was fixed after a couple of hours, and my sister gave me a lift back to Ferntree Gully to fill in the paperwork with BART! and take delivery of the car.

I can only hope he wasn’t watching when the first thing I did was to stall it.

The drive home gave me some much needed practice, and I’ve been driving it to and from work since Wednesday too. Apart from familiarising myself with the joys of the manual transmission, I’m also familiarising myself with the best route to take. On Wednesday, the advantages of car travel were not entirely apparent, when during peak hour it only saved me about 10 minutes of travel time over taking the two trains and a bus that I’d been previously catching. And my ability to read a newspaper is hampered somewhat when driving.

I’m sure I’m not the only person to think that the road system would work much better if there was nobody apart from me travelling on it. But by Friday I had worked out where a few of the troublespots were, and how to avoid them.

One unavoidable spot that I considered a troublespot is the intersection at the corner of Riversdale and Warrigul Roads. This is not because it’s clogged with ludicrous amounts of traffic, but because it’s at the top of a hill. No matter which direction you approach it from, you end up stopping on an alarmingly angled upwards slope if you have to stop at the lights.

This presented a problem, because for me, hill starts were a bit dodgy. For those of you wimps who drive automatic cars, all you need to know is that after stopping on a steep slope in a manual car, you will roll backwards if you take your foot off the brake. On a moderate slope if you’re extremely quick with your feet, you can get onto the accelerator and off the clutch before you roll back more than a few inches. But not at this particular intersection. Here you’d either need to be Fred Astaire (or perhaps Fred Flinstone) with your feet, or do a proper hill start – with all of that messing with the hand brake.

But after a few times badly impersonating Fred (and getting a few screeches of tyres and stalls as a result), I decided I wasn’t going to be intimidated by a mere hill. Who was boss of my car, that incline, or me? I did some hill start practice in some hilly streets near work during Friday lunchtime, and that night I purposefully drove to that intersection, and I stopped, and I moved off again, without a screech, without rolling back, and without a stall. So up yours, hill!