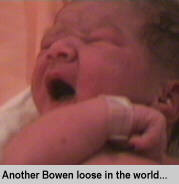 He weighed 4060 grams. This of course means nothing to anybody, not even here in the Metric world, because for some reason we continue to compare the weight of newborn babies in Imperial, even a quarter of a century after Imperial got officially thrown out the window.

He weighed 9 pounds 1 ounce. This, in childbirth terms, is a severe "youch". But wait, it gets better. I’ve never had to get something weighing 9 pounds out of my body in such a fashion, and hopefully I never will, but the fact that L did this without any help from pain killers or drugs just impresses the hell out of me.

Okay, so she had two Panadol afterwards, but that hardly ranks up there with happy gas or having a needle stuck in your back so you can’t feel anything whatsoever from the childbirth zone. In fact to move a kid that size through you and then ask for two Panadol, is, I think, more an exercise in showing off than in pain relief.

As it turned out, I think getting home was a trickier exercise than getting him out of the womb.

On Friday, the hospital people said that since everything had gone swimmingly, and the two main participants in the exercise – L and Jeremy – were as fit as fiddles, they could make the trip home that afternoon. A nurse would drop by for a few days just to see how things were going.

We don’t have a car. Plenty of people know that. It’s something that’s in the works – we haven’t really needed one until now, but now it’s something that is going to be extremely convenient to have, so I’m getting organised. Its arrival is imminent – probably within the next few weeks. But I’m not rushing into anything. I’ve got a fully fledged family now, so I’m not going out and buying some bomb on wheels that breaks down every two hundred metres like I might have done if I’d done all this ten years ago. Equally, I’m not going to rush out and borrow and spend the equivalent of ten or more years worth of Zone 1 Monthly Tickets on this new mode of transport until I know exactly what I need, want, and am getting.

So, how would we get our Brand New Human(tm) home? As it happens, if you walk outside the hospital, there’s a tram stop. Of the multitude of routes that stops there, the one generally going by the handle "67" goes within two minutes walk of our house. This sounded like a reasonable plan. Avoid rush hour, and it’d be a piece of cake. Not as fast as the tram/train combination we usually use, but involves the minimum of hassle. The tram: this was plan A.

Except the hospital weren’t amused. Brand new baby, exposure to people’s germs on public transport, what if mum has an emergency, etc, etc. Okay, fair enough. Wish we’d known before, but fair enough, they know about this medical stuff. That’s why they work in the hospital.

So plan B: What if we take a cab? We need to buy a new car capsule for Jeremy soon anyway since we’re buying a car, so why not buy it now? No, wait, we haven’t got Isaac’s car seat handy, and he can’t go in a car without it. And it’s too much hassle to go home and get it.

Wait, we have Ingrid’s friend’s number. Ring Ingrid’s friend. She hasn’t got Ingrid’s new phone number. But she’s got Ingrid’s surname. Okay, ring Directory Enquiries. Damn, we can’t ring Directory Enquiries from this phone in the room. Go to the phone by the lifts. It’s out of order, won’t accept the coins. Okay, go down to the ground floor, there’s more phones there. Zoom down in the world’s slowest lifts. There they are, ground floor phones. One being used, one out of order, a notice advises to try first floor. Take stairs to first floor. Two phones there. One out of order, it won’t accept the coins. Other works. Dial Directory Enquiries. Give the name and street. Bingo, they’ve found it. And the number is…. silent.

And it was a free call anyway.

Okay hospital people, here’s plan B(ii): We’ll buy that capsule for Jeremy, and send L and Jeremy home in a cab, and I’ll take Isaac home on the train, which is how he and I got in there that morning. Hospital people say no, they’d prefer that mum doesn’t go home on her own, just in case a crisis develops.

Okay, plan B is up the spout. Time to call in the big guns: my sister – the one with the company car and the boss sympathetic to such domestic crises. And plan C(i): We’ll buy the capsule for Jeremy, my sister will take L and Jeremy home in her car, and, since we still can’t contact Victoria with our spare house key (for getting Isaac’s car seat to us), I’ll take Isaac home on the train.

So, ring my sister Susannah. Hmm, not in the office. Okay, ring her mobile. Not turned on, goes to voicemail. Leave a message. Eventually get hold of her. Does her car have the correct baby capsule bolt on the fensterbunk*? She’s not sure. Hold while she runs down to the carpark to check. Yes, it’s there. Eureka!

So, Isaac and I go to get the capsule. Find one of those adaptable ones that converts to a toddler seat when the kid’s old enough. On sale! Great! One problem: the bloody thing is huge. Too huge to carry while trying to direct Isaac to walk in the correct direction in the city crowds, let alone back onto the tram to get back to the hospital. Consider buying it, working out how it works in toddler configuration, putting Isaac in it and catching a cab back, but it all seems too hard.

Go back empty handed. Ring sister back. Plan C(ii): she will pick me up, we’ll go together to get the capsule, fit it to the car and then pick up L and Jeremy. She does, we do (and I spot the D-Generation’s Tom Gleisner walking down the street, carrying a baby capsule with baby inside it, while waiting for her). We spend ten minutes trying to figure out how the hell the capsule works before getting it all fitted nicely – lucky we both have degrees. L and Jeremy go home in her car, Isaac and I go home on the train, everybody meets up 45 minutes later, happy ending after all. Phew.

(*) Fensterbunk: I’m not sure of the spelling, but my sister claims it is a Dutch word for the part of the car just inside the rear windscreen, for which there is no English equivalent. It would be very convenient at times like these if there was a word for this, so in my family we’ve taken to just saying "fensterbunk" instead.

UPDATE: Numerous people have let me know there is an English term: "rear parcel shelf". Of course, putting parcels on the rear parcel shelf would be a bloody stupid idea, since they’d go flying around the car in a collision.