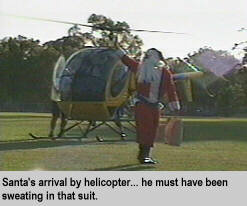 Yowsers. It’s almost Christmas again, which means the year is practically over. Quite frankly I’m amazed at how fast it’s gone. We’re all ready for Christmas. We’ve bought all the presents, we’ve sent all the cards. Well, okay, so I personally didn’t do most of it – like most married men in the western world, when I say "we’ve" done it all, I mean my wife did just about all of it. Everything except forging my signature and buying her own presents.

Actually L did buy one of her own presents, but that was just a freak occurrence. I bought everything else, and with a bit of luck she has no idea what she’s getting. She’ll be reading this, so I’m not going to spill the beans here.

Meanwhile the Christmas festivities have been going strong. The office Christmas tree appeared about a week ago – with lights of course, I’m working for an electricity company right now. And we had a massive three course, four hour lunch last Friday. One of those ones where we all go off to lunch to eat, drink and be merry, and the only people who even bother to come back to the office are those just picking up their bags to take home.

While we were all ploughing into this mammoth lunch, some joker in the office diverted our phone. To America. To some poor sod’s house. And during those hours, about half a dozen calls came through for either me or the guy I share the phone with. The phone system happily diverted the call through to these poor bastards somewhere in the US, who were no doubt trying to enjoy their Thursday evening, and were rather less than pleased to be getting calls from Australia.

We still don’t know who did it, but if we find out, I think we might have to get them to call this unfortunate number and offer profuse apologies. 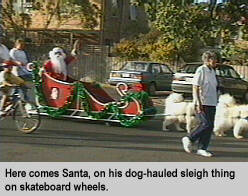 On Sunday after attending a toddler’s birthday party and holding a "Wine, Cheese, Wallace And Gromit-athon", we headed down to the park to see Santa Claus arrive by helicopter on the cricket oval. He climbed out waving, keeping his hand wisely below the level of the blades – what a picture it would have made if he hadn’t eh? He climbed aboard a kind of sleigh thing on skateboard wheels, which carried him through the carpark and into another bit of the park, pulled by a dozen Samoyed dogs, and pushed by a couple of rather big blokes from the Samoyed Club.

Santa climbed out of the sleigh and made his way down the line of kids, giving each a greeting and a bag of lollies, though he missed L’s now prominent "inner child". I didn’t notice if he was sweating or not, but in that suit, I wouldn’t be surprised.

His good work for the day done, Santa then got back in his sleigh and rode off back through the carpark.