On Saturday, as part of a gentle introduction to our quest to see more of Australia, we set off for Bendigo. Bendigo is about 150K’s north of Melbourne, in the heart of Victoria’s goldmining district. The train took about two hours to get there, weaving its way through varying countryside – from well farmed fields to thick rainforest – and towns of varying sizes.

By the time we arrived in Bendigo it was well and truly lunchtime (we hadn’t left home spectacularly early), so we cruised around the shops looking for some suitable food. Most suitable seemed to be pies and chips from a fine little establishment called Gillies, and we scoffed them down as we sat in the Hargreaves Street mall watching large numbers of the local population passing by. 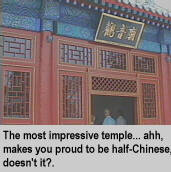 After that we started exploring, with the first stop the information centre, in the grand old ex-Post Office building on Pall Mall. They were very eager to give me brochures and maps, and almost chased me out of the place before I got a chance to even look at the various souvenirs on sale.

We headed north, up to the Golden Dragon Chinese Museum to check out my roots, but paused outside the door when we saw the (as it turns out, not unreasonable) price of $6. Having a sudden attack of stinginess, and having no idea what was in there, we decided to put it off til later, which quite frankly turned out to be a big mistake. We went instead to look at the Chinese gardens, and the temple, and most impressive they were too, along with the gateway and marble bridge over the Bendigo Creek. 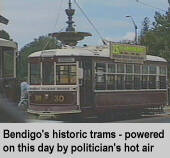 Then we headed back to Rosalind Park, behind the information centre, and strolled for a while there, trying to avoid the muddier spots. Through the park back to Pall Mall, we found what must have been all of Bendigo’s historical tourist trams waiting in the street. They were queued up ready to do a procession through the town to mark the 25th anniversary of the opening tour route – just as soon as a far longer queue of local and visiting politicians and dignitaries had finished their speeches extolling the praises of the trams, the town, the area, and well, just about everything else. They were still jabbering an hour later.

We stocked up on ice creams from an excellent ice cream shop, the name of which escapes me, and headed up the hill that is View Street, where according to the map, there were about half a dozen places of interest within a block of each other. These turned out just to be historic buildings. No, I’m not knocking historic buildings, I was just expecting at least one thing to be something involving a bit more activity than standing, looking up and saying "yep, that’s the old Fire Station/Temperance Hall/School Of Mines And Industries." 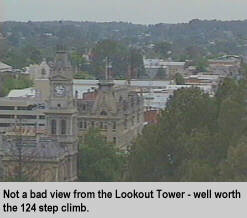 After tramping up and down View Street, we were looking for a bit more relaxation, and went back into Rosalind Park for some serious relaxation on the seriously angled sloping lawns, which were thankfully free of mud. Isaac and I climbed to the top of the circa 1931 Lookout Tower and enjoyed the rather impressive view of the town, the gardens and the newly restored waterfalls, with their various groovy statues and things.

Then we decided to stop messing around and do the Chinese museum. Once inside we realised that we should have come here first. It wasn’t just the fact that they have the longest Chinese dragon in the world permanently displayed around the perimeter of the building. It wasn’t just the immaculately presented displays. And it wasn’t just the personal tour we got (including a quick lesson in Origami). Okay, well actually maybe that was it. Anyway, we were rather disappointed that we had to rush things a bit (we didn’t want to have to get the late train back), and we’ve promised ourselves to get back to Bendigo soon – preferably at Easter when the dragon comes out – and make sure we see all that the museum has to offer next time.

Well, so long Bendigo, as Telly Savalas might have said… You’re my kind of town!