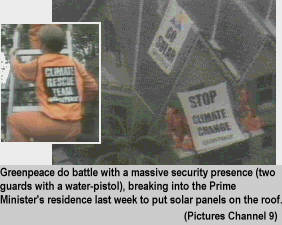 Is it just me, or does the Federal Government have absolutely no imagination?

PM John Howard is trying his darndest to back Australia out of binding targets for greenhouse gas reduction, which quite frankly is pretty embarrassing to a lot of Australians, myself included. I mean, I can certainly commit myself to reducing my own greenhouse gas emissions before 2010, but it probably won’t help very much if the rest of the country doesn’t, and it certainly doesn’t send a strong message to all those other countries who are quavering about reducing their own emissions.

All Howard seems worried about is jobs. He obviously hasn’t considered, or doesn’t believe the risks associated with global warming. (Maybe he wants to sell more Australian boats to low lying Pacific islands?) And he certainly hasn’t considered the new clean industries which might thrive in place of the old, dirty industries which might die should we actually reduce our greenhouse gas emissions.

Has he failed to notice the improving efficiencies of solar energy? Does he think the supply of coal and gas is infinite? Did he miss the announcement of a new electric car to be marketed by Toyota? Has he considered the benefits of anything other than the status quo?

Apparently not. And it’s not just the environment… the government seems to be happy to indulge in absolute inactivity over issues that are going to be very important in coming years, such as data privacy protection. And let’s not even mention race relations.

It’s a startling contrast to our state leader down here in Kennett County, SuperJeff. Now, I wouldn’t for a moment begin to pretend that I agree with everything Jeff does. I think he’s done some really stupid things. But he’s also done some good things. The point is though, that he’s looking to the future. He’s being ambitious, and trying to move forward.

It’s hard to believe that they’re both from the same political party. But they are. It’s just that one’s living in the 1990s and the other appears to be stuck in some kind of time warp.