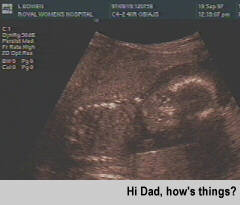 On Friday it was time once again to use all the technology that modern man has to offer in an attempt to look inside L’s tummy to see how the new baby’s doing, and most importantly, to see if we can find out whether we need more boy’s clothes, or some girl’s clothes.

It’s not definite, but the lady said she thought it was probably a boy. Which is good. Already having one boy, we know how they work. Not that I’d be complaining if it turns out to be a girl. As long as we get a human, I reckon we’ll be happy.

In the months ahead, comes the most difficult task. Harder than getting ready for the birth, harder than looking after the kid once he’s here… I’d even be so bold as to suggest that it might be more difficult than giving birth itself, though I’m nobody to judge that.

Yes, I’m talking about CHOOSING A NAME. And I can sense parents everywhere squirming as they read those three words. For everybody else, let me assure you, it’s a very difficult task. It’s a very great responsibility. The name you decide on will determine how the child’s life turns out; from when the other schoolkids realise what it rhymes with, to whether or not it needs to be spelt out every time a paperwork minion writes it down. Get it hideously wrong you may be murdered in your sleep by the kid fifteen years later!

We’ve got a few months, so we’ll drag out the baby name books again and start scouring.