All right Whitman’s, I give in. You’ve been sending your blimp after me for months now, it’s followed me so much that I can hardly look into the sky without seeing it proclaiming "Whitmans Chocolates" at me.

Well, I’ve had enough. I give in. I surrender. I have bought some Whitmans. And I’m eating them now. Here’s proof: 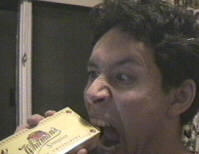 And yes, they’re delicious. Only problem is, at the rate I eat chocolate, I’ll be through the packet in no time. And they cost, gram for gram, more than twice as much as plain old Cadbury blocks. So I don’t think they’ll replace my Cadbury blocks. The box is very nice though. I expect I’ll put it away somewhere in the vain hope that one day I might be able to keep something in it, before throwing it out in a month or two.