Last week I spotted two sales pitches worth mentioning. One good, the other bad. 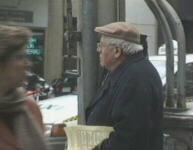 First the bad. A bloke on the corner of Elizabeth and Lonsdale Streets in the lunch hour, a pile of what could loosely be described as pamphlets in one hand. I presume these pamphlets were destined to be read by potential customers. I have to presume this, because unlike the more successful people who do this job, he held them close to his body, rather than thrusting them in people’s faces. I got the feeling that if someone actually wanted one they might have had to knock him unconscious and prised it from his hand.

And rather than bellowing his sales pitch for all in the vicinity to be deafened by and take notice of, he was hardly noticeable. I was with two other people when I passed him. One didn’t notice the guy at all. The other thought he was just waiting to cross the street. Only I heard his feeble cry… "Shirt ten dollars." Well he’s not going to win Spruiker Of The Year now, is he. 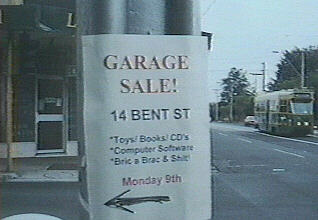 However, this week’s winning sales pitch was a masterstroke. It intrigued with its vague description of the goods on offer. It amused with its honest Aussie larrikinism. It informed with its precise address and helpful arrows pointing in the direction to go. Pasted around my neighbourhood today were notices that proclaimed:

Well if that doesn’t get the crowds in, I don’t know what will!

On the other hand, while eye-catching, they didn’t actually work on me – I never got around to going down there and finding out what they had. Tonight though, I did souvenir one so I could accurately reproduce it here. And so I could stick up in the spare room as a memory of possibly one of the great garage sales that I have so tragically missed out on.