All in all, the week’s been good. Work’s going okay, I’ve finally just about almost got a little bit of a grip on what we’re all meant to be doing.

I finally got the guided tour of the office, and was introduced to everybody – at least, everybody that the guy I’m working with could remember the names of. That’s okay though – a few seconds after I was introduced to most of the people, I had forgotten their names. That’s just me. I’m terrible at remembering names. I can usually recognise a face, but can’t remember the name that goes with it. At my last job it was easy – everybody wore security IDs, with their first name prominently displayed in capital letters.

Oh well. Just in case any of them are reading – to everybody except for Darren, Michael, Patrick, Annie, Judy, Ben and Vince – sorry.

I’ve dropped in on the people I used to work with a couple of times. And talking to some of the people in my area, it’s amazing how small the industry is, even in a big city like Melbourne. A lot of people you meet will have worked with the same people you have.

In fact, you know the Kevin Bacon Game? The one where every actor that ever was is linked back to Kevin Bacon by who else they’ve been in movies with? Someone should do an IT industry version of the Kevin Bacon game. In fact if anyone wants to have a bash at it, I’ll donate my name to the title. The Daniel Bowen Game. Rings a bell, doesn’t it. If this takes off, my name could be a talking point at geek parties all over town. 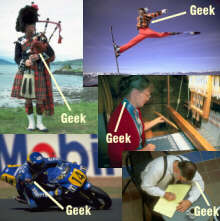 And yes, I think most of the people who work in the IT industry are geeks. I think I’m a geek. Sometimes I’ve tried to deny it, but there comes a point where you realise that it’s just something you are. The point I got to was when I realised how many of my friends only bother to ring me when they’ve got questions to ask me about computers. I’m probably in their address books under "G".

But that’s okay, because everyone’s a geek. We’re all geeks with something. If you know more about anything than someone else, you’re a geek.

It’s just that the G word is usually reserved for computer people and the like. We all laugh at trainspotters (I mean the people, not the movie), we all think "gee, what nerds. What complete geeks". But everyone’s geeky about something.

Fascinated by the intricacies of HTML? You’re a geek. Know all about hifi? You’re a geek. Got everything about cars, all that twin-cam ABS fuel-injection stuff all memorised? You’re a geek. Remember every footy game your club has played since you were born? Geek. Do you know without looking at the labels which clothes have to go in the wash on hot, which on warm, and which on cold? Geek. Can you tell the difference between all your drill bits without a second glance? Geek.