Well! Here we are in America. And in between falling into canyons and getting lost in the malls, I thought I’d rattle off a quick entry. 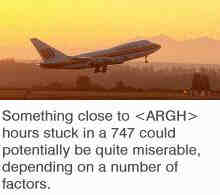 The Pacific Ocean is big. That’s probably why it takes so long to get from Australia to America. Something close to [ARGH] hours stuck in a 747 could potentially be quite miserable, depending on a number of factors.

One of the factors is “those little bastard teenagers called Richard and Oliver who have just discovered reclining seats”. On every aeroplane carrying more than about a hundred people, you will find a Richard and Oliver. If you’re lucky, they won’t be sitting in front of you. We weren’t that lucky.

It gets a little like that bit in the Simpsons where Homer says “bed goes up… bed goes down… bed goes up…” and it can be particularly frustrating when they keep doing it while you’re trying to eat a meal. So we took the logical course of action. We made friends with their parents, who were sitting next to us. It only took a few minutes of idle chatter (introduce the baby, that one that works every time) before “Oliver! Richard! Put those chairs up and leave them there!”

The toilet of a 747 is a wondrous device. It’s quite obvious that the ergonomics and user-friendliness people were away the day they designed the toilet. Otherwise why would the door be made so it *always* looks like it’s engaged? Trust me, if you’re on a 747 and needing a quick lavvy session, even if people are waiting, push on the door anyway. It’s the only way of being sure that there’s someone in there.

Of course, the 747 toilet defines the term “small”. Never have so many conveniences been packed into the one err… convenience. You need to be very careful not to bang your head on the paper dispenser while trying to reach for the paper cups and trying to hold onto anything vaguely handle-shaped during turbulence.

If you manage to take care of your business, stand well clear when you flush. That is one WEIRD flush! A kind of super-powered vacuum slurps everything down the drain. Wouldn’t surprise me if it was directly powered by the plane engines.

The in-flight movie annoyed me. What annoyed me wasn’t so much the fact that it was edited for airline viewing, but the fact that the airline believed that intelligent human beings with an ounce of dignity left would enjoy such crap. Thank you, United Airlines.

Even if you don’t want to watch the movie, you end up watching the movie. You can’t avoid it. It’s up there on the screen. You have to keep looking. I was amazed at my ability to comprehend the plot just by glancing at the screen every few minutes, and without the benefit of the sound.

I think I have found the closest thing to chaos that you will ever see on Earth. It’s called LAX. At LAX, thousands of people run around in all directions talking and shouting in hundreds of languages. And then there’s the passengers. After the five mile walk from the terminal to Immigration, we got our luggage off the conveyor belt twirly thing, went through Customs, only to put everything back onto another conveyor belt to go (hopefully) to our destination, Phoenix.

The bus between the international and domestic terminals was a bit like you might imagine a prison ship of the 1700s; a box stuffed with people. By some miracle we managed to get out intact at the correct terminal, with our possessions and a few people who got caught up with the mass rush out of the bus. After we found the gate and somewhere to sit, and could relax, and change the baby’s nappy. (Another one for the list of interesting nappy change locations.)

All in all, a reasonably good journey. Heck, we got there in one piece didn’t we? And with all our luggage; that’s the real miracle. And it gave me a chance to sample an entirely new and unique life experience – that of attempting to eat breakfast in an extremely confined space while watching the Golf Channel.

America is a big place. In fact, the continental United States is about the same size as Australia. Big. We’re only seeing a few bits of it on this holiday.

Arizona is big and flat, except for the bits that aren’t. One of those bits is the Grand Canyon. Let me tell you right now, the Grand Canyon is BIG. Very big. It’s so big that I think they should consider a name change, quite possibly to the Freaking Big Canyon. Capital letters in the name, and perhaps a kind of 3D chiselled look with a quadriphonic fanfare wouldn’t go astray either. In fact, the word “big” may not be adequate. Perhaps humungous would be better.

We’ve also done a bit of horseback riding around the desert. This is a lot of fun, although the disclaimer was a bit scarey. Something about no liability no matter how many broken bones you get when your horse (and a pack of wild jackrabbits) trample you to death.

But the ride itself turned out to be very relaxing. The only downside was all the bits in the nether regions that were sore later, including several bones I didn’t know I had.